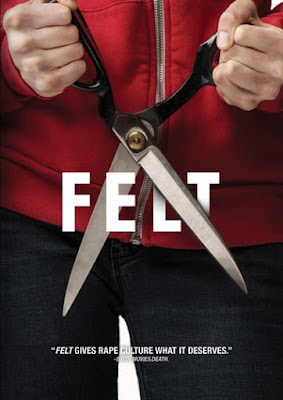 When I first heard about “Felt”, I was interested in it because what I heard about the film and all the reviews that this was getting. Still, I didn’t know if I would like this given that nature of this film. But I ultimately wanted to this because I haven’t done a buzz worth micro budget film in a while.

The film is about a woman (Amy Everson) who is struggle to live life in a male dominated society. She begins to act out these strange fantasies by herself. One day, she meets a man who seems like a good person and starts to open up to her. But she starts to become vulnerable and her dark secret and other side of her threatens to explode and become violent. Going into “Felt” I didn’t know what I was going to expect given its trailer and the buzz around the film. I still wanted to check this out anyway after hearing the praise of this film from various sites. I was glad that I checked this film out, as this is one of the more disturbing films that I’ve seen all year.

The reason that this film works so well here was the directing of Jason Banker. This could’ve a been one of those films that I could’ve been bored but he does a great job making sure the film has a disturbing feel to it. Whether it’s the way the film was shot to how he makes the scenes work in his direction, everything had a raw and different feel to it. It helped project the tone for what the film was going for. It’s something that grabs your attention, as I was interested in this throughout. The other thing that Banker does very well is get a great performance from actress Amy Everson. You couldn’t tell that this was her first film in a lead role. Banker does a very good job making sure Everson makes her character very demented through her actions and the way she delivers her dialogue. It helped make the character interesting and kept my interest in the main character and story.

The screenplay written by Banker and Everson was very good. One of things that makes this screenplay good was the way that they both focused on the main characters state of mind. Whether it’s the way the character interacts with other characters to how she ends up acting on her fantasies, everything focuses on her mindset. It helps give the character its demented and delusional traits that is needed for a character like this. The other thing that makes it good was the screenplay’s ability to generate some sort of reaction. It’s hard to do this with films of this nature when they’re scenes where the character is standing around. It works here, because it’s focusing and gives more insight on the main character and it builds the story and character right up until its shocking and abrupt ending. Speaking of that, this is the most horrifying end to a horror film this year and it’s a credit to how the writers approach the main character and the story of the film.

This will be one of the most shocking films that you’ll see all year. With its great directing from Jason Banker and great performance from Amy Everson, “Felt” is one of the best films I’ve seen so far this year.