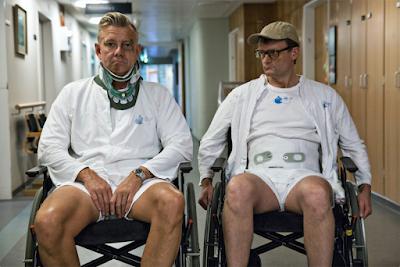 "Klown Forever" hits theaters in limited release and VOD in 2016.

Drafthouse Films has reunited with Denmark's Nordisk Film, director Mikkel Nørgaard, and notorious comedic duo Casper Christiansen and Frank Hvam to release the sequel to 2010's outrageous Klown, entitled Klown Forever, marking a return of the most depraved comedy of errors in five years. Drafthouse also released both the original film and the entire Danish television series in 2012.

A long-running Danish TV sitcom, Klown follows the misadventures of best friends Casper and Frank as they bumble through an impressive number of poorly laid plans and disastrous social situations. When we last saw the boys, they were riding the fallout of an ill-fated excursion to a riverside brothel; Klown Forever picks up five years later, with their strained friendship at risk when Casper relocates to Hollywood. In a last-ditch attempt to salvage his relationship with his best friend, and escape an increasingly humdrum domestic life, Frank follows Casper, and their predictably unpredictable brand of chaos ensues, as though Lars von Trier were directing an especially mortifying episode of "Curb Your Enthusiasm."

In addition to Casper's attraction to Hollywood, the Klown series has attracted its fair share of of admirers as well, including actor/comedian Sacha Baron Cohen (Borat), who has named Klown his favorite comedy ever. In their latest misadventure, Frank and Casper inflict their particular brand of ignominy upon several of LA's denizens, including Isla Fisher, Adam Levine and Nikolaj Coster-Waldau ("Game of Thrones").

"We want to be in the Klown business with Frank and Casper as long as they keep making them," stated Drafthouse COO James Emanuel Shapiro. "Without a doubt, these are some of the funniest movies ever made and we are proud to share them with audiences."

Having just opened in its native Denmark this past weekend, Klown Forever will see a limited theatrical release across North America alongside a variety of VOD and digital platforms in 2016, with a Blu-ray/DVD release to follow later in the year.
at 1:00 PM
Labels: Drafthouse Films, Indie News, Klown Forever