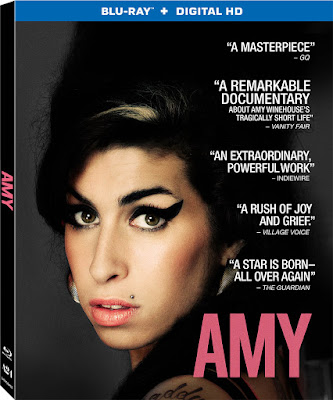 Lionsgate and A24 recently announced the upcoming DVD and Blu-Ray of the critically acclaimed documentary "Amy". The film is the story of six-¬time GRAMMY® Award winner Amy Winehouse who died in 2012. From her own words to extensive never-before-seen archival footage and previously unheard track, its a documentary that can't be missed.

The much-anticipated, spellbinding documentary chronicling the rise and tragic fall of Amy Winehouse – one of the most legendary singers of our time – AMY arrives on Blu-ray™ (plus Digital HD) and DVD (plus Digital) on December 1 from Lionsgate Home Entertainment. From the award-winning director of Senna, and featuring raw footage of Winehouse, this “extraordinary, powerful” (Indiewire) film is the best-performing box office biographical documentary to date this year, and features never-before-seen footage of the talented singer (including collaborations with her musical idol Tony Bennett and producer Mark Ronson) along with interviews with her closest friends and family, as well as previously unreleased music recordings. Certified Fresh by Rotten Tomatoes, this intimate, shocking, and brilliant film was a Cannes Film Festival Official Selection, and was released theatrically in 2015 by A24. Featuring audio commentary by the director, never before seen performances by Winehouse and deleted scenes, AMY will be available on Blu-ray and DVD for the suggested retail price of $19.98 and $24.99, respectively.

From BAFTA award¬‐winning director Asif Kapadia, AMY is the incredible story of six-¬time GRAMMY® Award winner Amy Winehouse – in her own words. Featuring extensive never-before-seen archival footage and previously unheard tracks, this strikingly modern, moving, and vital film shines a light on the world we live in, in a way that very few films can.
at 11:20 AM
Labels: A24, Amy, Documentary, DVD/Blu-Ray News, Lionsgate, Music Documentary