Class is in Session with "Class Of Nuke 'Em High III: The Good, The Bad And The Subhumanoid" on Blu-Ray 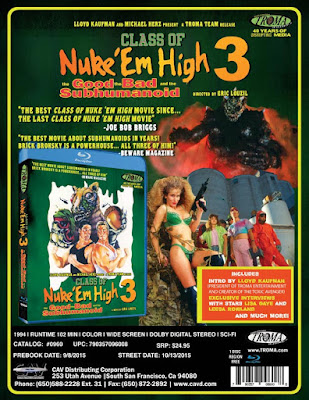 Troma Entertainment recently send us information for their upcoming Blu-Ray release of "Class Of Nuke 'Em High III: The Good, The Bad And The Subhumanoid". The film stars Brick Bronsky, Lisa Star and John Tallman.

Special Features on the Blu-Ray includes Intro by Lloyd Kaufman, Exclusive interviews with stars Lisa Gaye and Leesa Rowland and Much, much more!

"Class Of Nuke 'Em High III: The Good, The Bad And The Subhumanoid" hits retail on October 13th.

Welcome back to Tromaville High!!! The only school in the country with a giant nuclear rodent for mascot, detention for melting and a bikini dress code. Wanna Hall Pass? Wanna Bus Pass? Wanna Pass Gas? You won't pass up the mind-bending special effects! The Tromaville student body is in danger again... and it's not of flunking. Tromaville is under attack from a subhumanoid army led by the evil Dr. Slag and his perfectly proportioned partner Professor Holt (a woman scientist with really big hair, portrayed by Lisa Gaye). On top of that, TROMIE the Nuclear Rodent is raging mad! 3 times the evil of the original! 3 times the mutated monsters of the sequel! With subhumanoid twins battling for Tromaville, more bodacious babes than ever and 3 times the nuclear meltdowns, it's all action and excitement in CLASS OF NUKE 'EM HIGH 3 -- The Good, the Bad and the Subhumanoid!
at 12:23 PM
Labels: Blu-Ray News, Class Of Nuke 'Em High III: The Good, Lloyd Kaufman, The Bad And The Subhumanoid, Troma Entertainment