Troma Gets into the Ring with "Pro-Wrestlers vs Zombies" 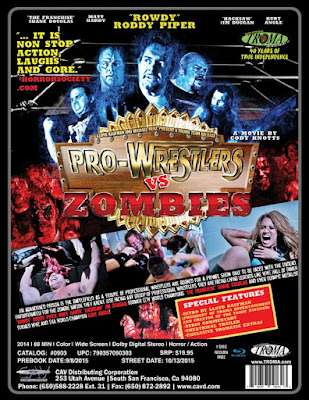 Pro-Wrestlers Vs. Zombies is exactly as it sounds -- sports entertainment icons and local ring talent using their signature fighting styles, athleticism and anything they can get their hands on to fend off the undead. An abandoned prison is the battlefield as a troupe of professional wrestlers are booked for a private show, only to be faced with the undead. Unfortunately for the zombie nation, they aren't just facing any group of professional wrestlers, they are facing living legends like WWE Hall of Famer Rowdy Roddy Piper, Matt Hardy, Hacksaw Jim Duggan, former ECW World champions including The Franchise Shane Douglas and even Olympic medalist turned WWE and TNA World champion Kurt Angle!
at 4:00 PM
Labels: DVD/Blu-Ray News, Pro-Wrestlers vs Zombies, Troma Entertainment