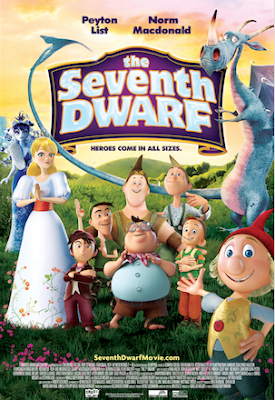 “The Seventh Dwarf” is a film that I wanted to check out because it looked like something that I might like plus the film was released by Shout Factory, who mostly specializes in catalog releases and I’m a huge fan of the label.

The film follows seven dwarfs as they attend Princess Rose’s 18th birthday party. They meet guests including Snow White, Cinderella and Red Riding Hood. When the youngest dwarf Bobo accidently uses a cursed needle on Rose, everyone in the kingdom becomes frozen. Now, Bobo and his fellow dwarfs must find Princess Rose’s true love to save the kingdom and end the curse before it becomes an eternal slumber for the kingdom. The film features the voices of Peyton List, Norm Macdonald, Nina Hagen, Joshua Graham, and Matt Gilbert.

Going into “The Seventh Dwarf”, I was hoping this film would be at least watchable like other animated family films have become over the last couple of years. By twenty minutes into the film, I was begging for this film to end as it got worse and worse as it went along.

Most of that has to do with the film’s direction. Harold Siepermann and Boris Aljinovic’s direction felt very dull and very boring to watch. One of the reasons for this was the way they direct the film’s cast. They don’t do a good job making sure their cast to bring any personality to make these characters exciting. It felt like I was watching a children’s program on TV at times. The performances were very one note and comes off as annoying at times. An example of this the fact that Norm McDonald’s character who sounded very bored in this film. This is a comedian who was on SNL as a cast member and appeared and starred in various comedy films. He was just awful here because he isn’t given anything to. This film lacked any energy. I’ll go more into this when I talk about the film’s screenplay in a minute. I expect a little more than the television rate in the vocal performance department.

What I will give Siepermann and Aljinovic credit, they along with their animation team does a very good job with the way the animation looks. They take their time making sure the images look very looks crisp especially when viewing this on my blu-ray player and HDTV. It made the look of the film and the would-be 3D effects look very good in 2D. Sadly, this is the positive thing that I can say about this film.

The screenplay from Siepermann and Daniel Welbat and Douglas Welbat was bad throughout. One of the things that this story tries to be like “Shrek” in the way it portrays the fairy tale like characters. It doesn’t work here as it didn’t feel like a perfect fit with the story. It felt a little out of place with the tone of the film and the most of the original characters were bland. This might be a good film for kids as it has positive messages but it didn’t feel like one of those films that appealed to me like most other Hollywood animated films as of lately. The main reason for that was the film’s humor. There was nothing to laugh here. It all has to do with its main characters. I thought they were bland and one note for the either film. When that happens, it’s had to laugh at some of the jokes because they come off as flat and boring. I wished, they had more personality in their characterizations to make the humor work because it made for a very boring film to watch.