"The Man From U.N.C.L.E." Review - Written by Tim Hellman 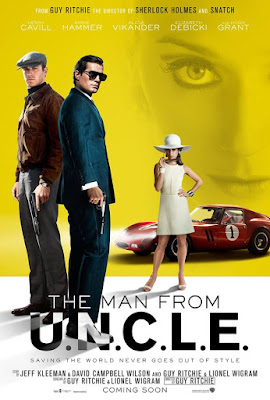 Spy flick, directed by Guy Ritchie, and based on the 1964 TV series, of the same name. It stars Henry Cavill and Armie Hammer, as two secret agents, one American and one Russian, assigned to work together; to stop a mad couple from building a nuclear weapon. The film also stars Alicia Vikander, Elizabeth Debicki, Luca Calvani, Jared Harris and Hugh Grant; it was written by Ritchie, Lionel Wigram, Jeff Kleeman and David Campbell Wilson. I found the film to be stylistically awesome, funny and immensely entertaining; despite a weak plot!

The film begins in 1963 East Berlin. CIA agent Napoleon Solo (Cavill), has just tracked down a woman, by the name of Gabby Teller (Vikander, of'EX MACHINA' fame). He's being followed by a KGB agent, named Illya Kuryakin (Hammer), who also wants to apprehend Teller. Gabby's father is a Nazi scientist, who's been aiding the U.S. government, but went missing. It turns out that the scientist's knowledge is being used to create a nuclear weapon; for a rich Italian couple (Debicki and Calvani) in Rome, with former Nazi ties. After Solo and Kuryakin try to kill each other, they're forced to team up, by their employers, and stop the completion of the nuclear device. Teller helps them, on their mission in Rome, as well.

Like many previous Guy Ritchie films, I couldn't follow the storyline nearly at all (while I was watching it). Also like previous Guy Ritchie flicks, it didn't matter though. The movie is funny (the jokes almost always work) and the characters are very likable (you actually care what happens to them). I wasn't involved in what was going on with the plot, at all; but I was very involved in what was going on with the characters. Cavill and Hammer are both brilliantly cast, and they have great chemistry together too (the film turns into an awesome buddy flick). Vikander and Debicki are both stunningly beautiful and good in their roles as well; Debicki makes a great femme fatale also. The film is also beautifully stylistic, action-packed and always fascinating to watch; even if you don't always know what's going on. Besides a coherent plot, you can't really ask for a lot more in a film; this is definitely not a movie that demands one though. It's Guy Ritchie at his best!
at 8:09 PM
Labels: Armie Hammer, Henry Cavill, Hugh Grant, Reviews, The Man from U.N.C.L.E., Warner Brothers