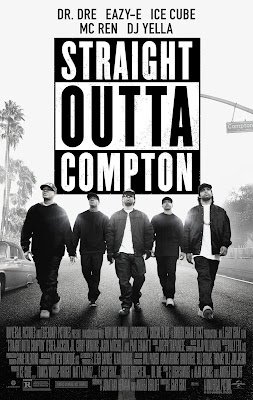 'STRAIGHT OUTTA COMPTON': Four and a Half Stars (Out of Five)

The movie begins in 1986; when friends Easy-E (Mitchell), Ice Cube (Jackson, Jr.) and Dr. Dre (Hawkins) formed the rap band N.W.A.. MC Ren (Hodge) and DJ Yella (Brown Jr.) later joined the group; although this is not covered in the film (as their parts are not fully developed). Easy-E first bankrolled their project; and formed his own record label, with producer Jerry Heller (Giamatti), called Ruthless Records. After releasing a hit single, 'Boyz-n-the-Hood', and doing a successful show; the band was later picked up by Priority Records. The movie covers their entire rise and fall from fame, as they caused a music (and social) revolution.

I've never been a huge rap or hip hop music fan, and I never followed (or listened) to the group N.W.A., but I did enjoy learning all about them in this film (and I do now like their music). For me the movie was very informative, and I also really liked the style (and look) of the film (thanks to Gray's excellent direction). The performances are decent enough, and the social commentary couldn't be more fitting to the times today; the film largely deals with race relations and police brutality (and it doesn't seem like much has changed, between then and now). The movie's a little long, and slow paced in places, but for the most part it's very entertaining and inspiring; what's more beautiful than watching talented rebel artists change the world?!
at 7:05 PM
Labels: Paul Giamatti, Reviews, Straight Outta Compton, Universal Pictures