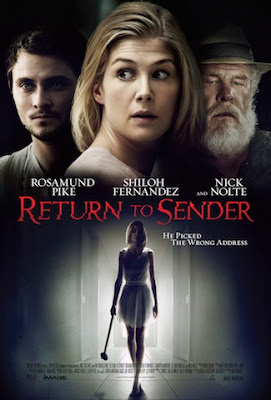 A very different film, very weird. Paced with character development and a deeper thriller reality that gets under your skin, and displays itself with a brutality that lingers at times. This is being released by RLJ Entertainment. A rape and psychological revenge film that uses the old clichéd subject. This film creates a drama alongside the deeper, and darker concepts of this reality. I was not sure at first about this film due to the fact it’s all been done before countless times. With that said I felt the main reality to this film is the characters themselves, and not really the actions taking place. Most rape, revenge films are all about the actions against one another, this film, yes has that, but it’s almost a background noise, because you get to experience the characters, and the emotional reality of just how these violent acts can change a person, alter a person, and ultimately make a person step into a realm beyond the human persona.


The plot is very simple at first. Miranda, a nurse who lives by herself is selling her home. During the process of changing jobs she agrees to a blind date. The day of the date, Miranda doesn’t realize the darkness that awaits her. Soon that purposed date, mixed with confusion, leads Miranda into a violent moment that forever changes her, and sends her down a path of emotional, and human nightmares.


The movie has its major flaws. The film is rushed and never really explains a lot. You don’t know how much time has passed. I know our justice system is flawed, but a perpetrator this day and age as displayed in this film, would have gotten more time, but that also goes back to the film not explaining the time process, so it leaves the viewer confused.


What truly stands out is the ensemble cast of actors and actresses. A wonderful array of performers. The very beautiful and talented Rosamund Pike, plays the main lead Miranda. Pike is most famous for her 2014, Gone Girl fame. She plays a unique and twisted little performance in this movie and brings an emotional performance as the Brutalized Miranda.
The ever wonderful Nick Nolte. Nolte plays Mitchell, Miranda's dad. I can't believe how old Nolte is getting. Always a fabulous performer. Also starring one of my favorite females in a mall role, that never gets the limelight or stardom she deserves, Camryn Manheim. I absolutely love Manheim. Always great to see. Besides Pike, the award goes to Shiloh Fernandez, who plays William Finn. Both Pike and Fernandez have a great chemistry together. They ace there parts in this odd, twisted, and at times very disturbing film. The movie plays deep into a psychological spiraling story that leaves a lasting impression.


If you look hard you will see actor Ryan Phillippe in a cameo as the UPS Delivery man. This plays out due to the fact one of the co-writers of Return to Sender, is also the co-writer of Ryan Phillippe's directorial debut film, Catch Hell (2014). Return to Sender’s main downfall is, it plays out like a television movie. I could see this showing on Lifetime Movie Channel. There is violence in it, but the violence is mainly off screen, or for the imagination. The movie copies a lot of better known cinema. Its takes the reality of Home Invasion horror, twisting the action of rape, while spiraling into a somewhat water down copycat of I Spit on your Grave with a twist of Misery.
Directed by a new comer Fouad Mikati. This is Mikati's second feature film. Solid direction at times. Solid acting. Solid story at times even with its major flaws. This is a very dark impressive thriller that has equal parts drama, and equal parts psychological crime story. Yes its clichéd. Yes it's been done before, but I think this one executed it in a different way.


Overall the film is recommend even with its tired clichéd reality. Really was amazed by the acting, and that’s why I think it’s worth a watch even if it’s recycling of an old story, trying to be something new. Flawed in many ways but still was entertained.
Reviewed by: Abraham Phillips
My Rating: 2.5 out 5
at 3:31 PM
Labels: Return to Sender, Reviews, RLJ Entertainment, Rosamund Pike