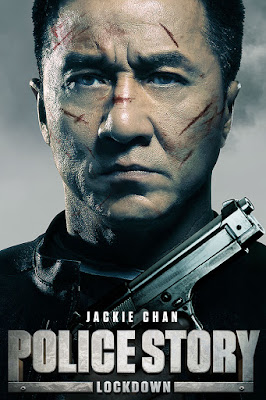 'POLICE STORY: LOCKDOWN': Three and a Half Stars (Out of Five)

A reboot to the popular Chinese action flick series 'POLICE STORY', starring Jackie Chan. In this film, also known as 'POLICE STORY 2013' in China (where it was released two years ago), Chan plays a mainland Chinese police officer (rather than a Hong Kong one); who's trying to protect his rebellious daughter, from a hostage situation at a local bar. The movie was directed and written by Ding Sheng and it costars Liu Ye and Jing Tian. The film is quite a bit darker, and more melodramatic, than other 'POLICE STORY' movies; and for that reason (among others) I didn't enjoy it as much.

Detective Zhong Wen (Chan) is a veteran mainland Chinese detective, who's visiting his daughter, Miao Miao (Tian), at a popular nightclub. Wen is angered to learn that Miao Miao, who hates him, is dating the owner of the bar, Wu Jiang (Ye). After a heated argument, Wen is also troubled to discover that the club has been taken over by terrorists; he's knocked out and held hostage as well. Wen also soon learns that he's part of the criminals' revenge plot. Things become more complicated from there, as Wen desperately tries to save his daughter.

I used to be a huge Jackie Chan fan, when I was younger; I've since grown a little tired of the lack of diversity, and originality, in a lot of his films (I also really don't like him as a person, anymore, or his politics). The first three 'POLICE STORY' movies were some of my favorite martial arts action flicks though, and this installment definitely doesn't do them justice. The action scenes are OK, and Chan does give a good performance in it, but the serious dramatic tone definitely doesn't help the film out; it usually makes it seem a lot more cheesy. I was willing to give the movie a chance, despite my recent disgust for Chan (due to his personal views), but the film is definitely a disappointment; for fans of the series or Chan.
at 5:39 PM
Labels: Jackie Chan, Police Story: Lockdown, Reviews, Well Go USA