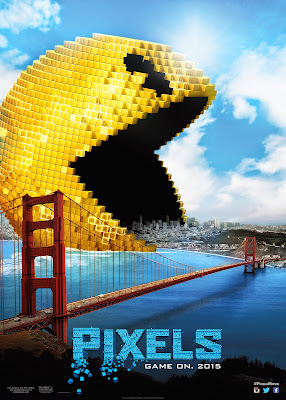 'PIXELS': Three and a Half Stars (Out of Five)

Adam Sandler's big budget sci-fi comedy bomb; about an alien invasion, in the form of classic 80s 8-bit video game characters. Sandler stars in the movie, with his buddy Kevin James; along with Josh Gad, Peter Dinklage, Michelle Monaghan, Brian Cox, Sean Bean and Jane Krakowski. It was directed by Chris Columbus (who's famous for directing such popular hits as 'ADVENTURES IN BABYSITTING', 'MRS. DOUBTFIRE', the first two 'HOME ALONE' films and the first two 'HARRY POTTER' movies) and it was written by Tim Herlihy (Sandler's buddy, who also co- wrote 'BILLY MADISON', 'HAPPY GILMORE', 'THE WEDDING SINGER', 'THE WATERBOY' and other hit Sandler flicks) and Timothy Dowling (who also co-wrote the Sandler film 'JUST GO WITH IT'). It was based on the 2010 2- minute French animated short, of the same name, by Patrick Jean. It's not nearly as bad as the reviews make it out to be, or the film's Box Office; it's actually pretty entertaining (for an Adam Sandler movie, at least).

The movie takes place sometime in the near future, when aliens have misinterpreted a video feed, from earth, featuring classic 80s 8-bit video games, as a declaration of war. So they attack our planet, in the form of characters from those games. Sandler, James, Dinklage and Gad all play former child video game whizzes, from the 80s, who now need to use their skills to combat the alien invasion. They're given three specific game challenges, in which, upon defeat, they'll lose a life (and someone is abducted). When they lose all three lives, earth will be destroyed. James's character is also the President of the United States (for some bizarre reason).

The movie is a fun 80s throwback; if you grew up with these arcade games, you should get a kick out of it. The effects are just OK, and it's not especially funny, but it is entertaining; it's a fun summer popcorn flick, at least. It's much better than Sandler's usual slapstick garbage, especially the stuff he's been putting out lately, and it's nice to see him branching out, and trying different things. This is at least somewhat different; he's never done an action movie before. It's also a good kids' film, and it's not too dumbed-down; especially for an Adam Sandler movie!
at 3:27 PM
Labels: Adam Sandler, Columbia Pictures, Josh Gad, Kevin James, Michelle Monaghan, Peter Dinklage, Pixels, Reviews