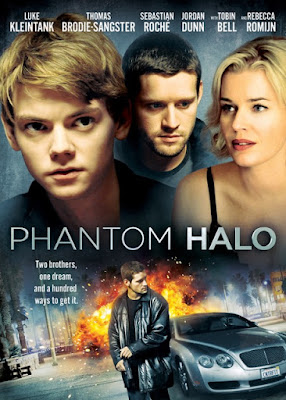 Phantom Halo is a great little drama that leaves a lasting mark on your memory because of the wonderful acting throughout the film. That is one of its strongest realities. The direction also comes together as something to be mentioned. The plot is clichéd, predictable but still maintains a worthy example of a film that does what it needs to do through acting, direction and even story. A gambling addicted father, two brothers lost, and at an end, approaching desperate means.

This is put out by Arc Entertainment. This company releases a lot of films that tend to remain with you after watching. I recently viewed there film Freedom which I thought was an entertaining film.

The cast is what truly stands out. The ever wonderful Tobin Bell. The amazing young cast of actors Thomas Brodie-Sangster, Luke Kleintank, both are gifted and bring the characters to life in a believable fashion.

Samuel and Becket are characters that linger, and you find yourself really connecting with them, as the film goes about. Samuel, a comic book loving, Shakespearian spewing young man, and his masterly pickpocket brother, go about having to deal with their alcoholic and gambling father, as he pushes the limits, and is now in bad water with a loan shark. The brothers must strive and try to better the situation as one wrong turn leads to another.

Directed and written by a new comer to the movie making world, Antonia Bogdaovich. This is her first directorial feature film. For this being the first feature film, I felt she captured everything that needed to be, to create a memorable piece of cinema. I felt the storyline, and execution in capturing the actors and actresses worked, as if this was a veteran director. This won the 2015 Best Drama Award at the New York International Film Festival and also won for Best Director.

Thomas Brodie-Sangster is truly a gifted actor that has been standing out, and getting my attention in everything he does. From small screen, to big screen, to cartoon voice acting, which for all you cartoon lovers, he is the voice of Ferb, in the long running comical cartoon, Phineas and Ferb. Also he is most recently in the film adaptions of the popular Young Adult novels, The Maze Runner. He captures the role of Samuel in Phantom Halo in a perfect, flawless performance. I felt he was the strongest reality to the film. The whole movie comes off in a way that seems real. Another stand out performance is by Luke Kleintank, as Samuel’s brother Becket. Kleintank is also a performer that makes you feel his character, and brings that character to life through an amazing performance. Both actors play off each other’s skills. The DVD which I am reviewing has an audio of English 5.1 Dolby Digital. The audio and video are perfect, no flaw in that reality. The video is a 16x9 aspect ratio. Overall, the film is a solid watch and a great example of an underrated film that should be seen.

My Rating: 4 out of 5
at 7:13 PM
Labels: Arc Entertainment, Phantom Halo, Reviews