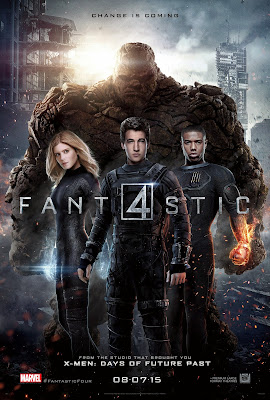 'FANTASTIC FOUR': Three and a Half Stars (Out of Five)

Twentieth Century Fox's reboot to their superhero franchise; which began in 2005 (and had one previous sequel in 2007). It's based on Marvel Comic's first superhero team, of the same name, created by Stan Lee and Jack Kirby (their first comic as well); and tells the story of four young scientists who are transformed into gifted superheroes, by teleporting to another dimension. It was directed by Josh Trank (the man behind the 2012 indie sci-fi hit 'CHRONICLE') and written by Trank, Jeremy Slater and Simon Kinberg. The film stars Miles Teller, Michael B. Jordan, Kate Mara, Jamie Bell, Toby Kebbell and Reg E. Cathey. It's received nothing but negative reviews, from critics and fans alike, due to studio tampering; which greatly altered Trank's true vision. I really enjoyed the first two-thirds of the movie, and I'd really like to see a director's cut someday (which Trank insists exists).

Since they met as children, best friends Reed Richards (Teller) and Ben Grimm (Bell) have been working on a special teleportation device. While showing it off, unsuccessfully at a science fair, they impress a local professor, Franklin Storm (Cathey); who's been working on the same thing. Storm invites Reed and Ben to join his research team; which includes his daughter Susan (Mara), his son Johnny (Jordan) and his protégé Victor von Doom (Kebbell). The young scientists succeed at their experiment, and then make a dangerous attempt to teleport themselves, to another universe. Once there, they gain special powers; and each must decide whether to use them for good, or for bad.

The movie begins as a fascinating character study, filled with good performances (from Teller, Jordan and the rest). It's involving, although somewhat slow paced, and pretty entertaining, all the way up till the third act. Then the film morphs into a completely different movie, and ends with CGI filled nonsense (with characters behaving in ways nothing like the film leading up to it). Fox was unhappy with Trank's first cut (a more original, and creative, character driven superhero flick), so they hijacked the movie; demanding reshoots and totally ruining the conclusion of the film. I really like what Trank was trying to do with the genre, before that though, and look forward to seeing more from him in the future. I also hope the upcoming sequel doesn't have so much big business pollution. It's at least not as big of a disappointment as Marvel Studio's 'ANT-MAN' (considering what that could have been, with Edgar Wright at the helm)!
at 6:35 PM
Labels: 20th Century Fox, Fantastic Four, Jamie Bell, Kate Mara, Michael B. Jordan, Miles Teller, Reviews