Dark Water Productions Gets Ready for War with "Check Point" 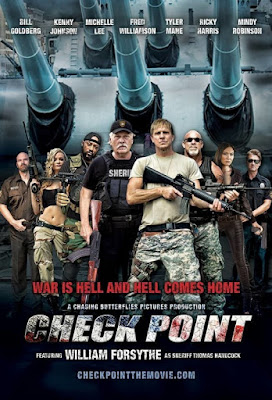 No release plans released as the film is currently in post-production.

For more information on this film, you can visit the film's official website at:  http://www.checkpointthemovie.com

Dark Water Productions -- When a vagrant (Kenny Johnson) goes to the Sheriff with serious concerns about an invasion of America, the Sheriff not only dismisses him but locks him behind bars for loitering. The Sheriff, played by William Forsythe, known for his roles as the villain in films and TV series, soon begins to have misgivings about his decision regarding the vagrant's ramblings about an eminent attack. The Sheriff, who initially ignored what is going on, inevitably becomes more aware of strange interactions between some towns people and starts his investigation into their behavior patterns and learns to take the vagrant's concerns more seriously and his worst fears of insurgent attacks set in after finding evidence of a gruesome beheading. When it seems the truth is blind and justice seems unattainable, five unlikely heroes form their own defense unit by infiltrating the conspirators in an attempt to foil any and all invasion plans. The incredible cast includes Bill Goldberg ("The Longest Yard"), Kenny Johnson ("Bates Motel"), and Michelle Lee ("The Hunted"), along with Fred Williamson, Tyler Mane, Mindy Robinson, Olga Safari, Kane Hodder, Krista Grotte, Ricky Harris and Niko.

Questions and tempers collide in this quiet beach community where everyone thinks they know everyone else. In reality - they DON'T. "Check Point" exposes real life terrorism and the sleeper cells they represent in America; the intriguing thread of the script, co-written by A.J. Perez and Thomas J. Churchill intertwined with today's headlines could stir as much controversy as the American Sniper did. What starts out as an unremarkable camping trip maneuvers into a story line of suspense and exemplifies the words of General Sherman during the Civil War...War is Hell. Hell comes to Port City in Check Point and life will never be the same.

This film is wrapped and is currently in post-production through Chasing Butterflies. This incredible film will not only entertain audiences, but will be a thought-provoking journey into the world in which we all now live.

"Check Point" presents the opportunity of a revealing look into two of America's most polarizing issues: Post Traumatic Stress Disorder (PTSD) and Terrorism. Through all of the drama and action in this film, there will be a raw and unadulterated look into the war that is still going on in thousands of our brave veteran's minds years after they have left the battlefield. It's pays homage and respect to those in the Armed Forces of the United States of America
at 7:19 PM
Labels: Check Point, Dark Water Productions, Indie News, Kane Hodder