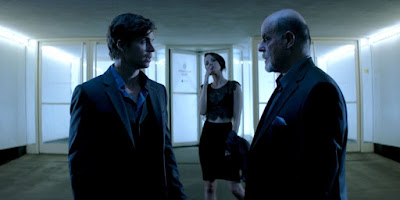 Synchronicity follows the story of a daring physicist who folds time to travel into the past, trying to stop a mysterious woman from stealing his invention. But once there, he gets caught in a love triangle that will fracture his reality and endanger his entire future.

Synchronicity is Gentry's third feature film and his fourth collaboration with lead actor Chad McKnight. His filmography includes The Signal, which was acquired by Magnolia Pictures after it premiered at the 2007 Sundance Film Festival and was nominated for an Independent Spirit Award, along with the My Super Psycho Sweet 16 trilogy, Last Goodbye and After the Disco. Gentry is also known for his work on music videos with the band Broken Bells. The first of which, THE GHOST INSIDE, starred Christina Hendricks and was nominated for an MTV Video Music Award.

With Synchronicity, Gentry wanted to draw inspiration from the gritty cyberpunk textures and analog synth sounds of sci-fi movies from the 70s and 80s, as well as the harsh shadows and smokey glamour of post-war crime dramas in order to create a retro-futuristic world that the audience could climb into and walk around inside of. He wanted the audience to experience an atmospheric playground where the mysteries of the universe can be explored in the dark unknown of time and space.

"For years I've wanted to attend Fantasia as a genre cinema enthusiast. So I couldn't be more excited for my first trip to the fest be as both filmmaker and die hard fan," said director Jacob Gentry. "I can't wait to premiere Synchronicity for the kind of audience I always want to be part of."

Synchronicity is produced by Alexander Motlagh known for The Signal and MTV's breakout series "Finding Carter," and Christopher Alender founder of Soapbox Films.