"Open Up to Me" Review - Written by Abraham Phillips 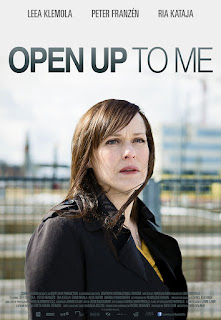 This is a beautiful piece of dramatic cinema. Corinth Films released a touching, thought provoking exploration of the human being and the idea of sexuality and being who you really are.

Your main character is Maarit, a woman who once was a man. She hides behind a low self-esteem and the idea of not begin fully who she wishes to be. The world around her has basically shunned her and destroyed her emotions. She can’t get a well-paying proper job because of the lack of acceptance. While cleaning a client’s office, a man named Sami shows up for a therapist appointment. Sami mistakes Maarit for his therapist’s assistant. Maarit goes along with the idea and starts to listen. She feels a connection. Soon she finds herself going along with the untruthful reality. She is able to finally open up. Soon she confesses her untruthfulness to Sami. To her ultimate surprise, there is a connection that is not shunned or broken. As times moves forward the two bond and ultimately the story begins. You the viewer experience the up’s and downs and truths, lies, and coming to terms with the emotional situations that transpire. Written and directed by Simo Halinen. Halinen created a truly wonderful piece of cinema that is both dynamic and passionate. An emotional ordeal. A film that sticks with you and creates a memorable piece of cinema. Simo has created something that will stand the test of time and I feel will be regarded as a truly flawless piece of cinema.

This at times showcases the heartache and struggle that transgendered individuals have to go through. A moving ordeal of emotions running rampant. Leea Klemola is utterly fabulous and extremely extraordinary in her part as Maarit. An award worthy performance that left me breathless. Equally impressive is Peter Franzén in the role of Sami. The chemistry between the two is flawless. They make this movie flow with perfect ease. Also starring the very handsome Alex Anton in the small part of the sexually repressed High School student. Anton does a really great job in adding a young fresh role to the film. Emmi Nivala plays Maarit’s daughter, also with a flawless ease of performing. Which might I add, this is her first acting job and for the small part she had, utterly stunning in her role?

The whole cast is perfect. The story is flawless. The emotional reality that takes place is something that I will never forget. Such a sad society where people just can't be who they are. People can't mind their own business and let people be who they want to be, without other people hating.

A changing emotional trip into romance, relationships, sexuality, family, love, and being who you are, and accepting who you are. The story is one that remains with you. Maarit’s ultimate ordeal of being a Transgendered person in a world that shuns her, and destroys her hope is displayed with a true reality that I feel we all can relate to, and feel the emotional baggage that she endures through the judgment, and hatred all around her.

This 2013 Foreign Finnish film is flawlessly done in so many ways. I can’t speak enough about the acting by Leea Klemola. Leea just gives her all. The film is very rich in story. The movie is something that details itself with the beauty of amazing acting, but also with a fine art of direction and story. I think there are so many movies that try to create this sense, but so many fail, Open Up to Me is not one of those failures.

A great film experience. Highly recommended. A must see film.