"Mark of the Devil" Blu-Ray Review - Written by Anthony T 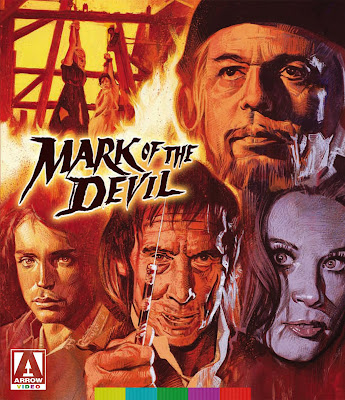 “Mark of the Devil” marks the first release from Arrow Video that I was able to watch. I was very curious about this label over the years after hearing how they give their British releases the Criterion treatment. This was the first released that I was interested in because of I’m into those types of films about exploitation films of British cinema and witches in general.

The film is about a witchfinder’s apprentice (Udo Kier) who comes to a small Austrian village where he falls in love with a girl. When his master (Herbert Lom) arrives in town, his faith in him is tested when his master deems the girl to be a witch. If matters isn’t worse for him, the town witchmaster general (Reggie Nalder) is a sadistic person that rushes to judgement and want to burn her at the stake. Now caught in the middle, can he find a way to help her escape a violent death before she ends up dead?

“Mark of the Devil” is surprisingly a good film given its subject matter. Director Michael Armstrong does a very good job making the material of the film interesting and shocking. Whether it was the way that the scenes were filmed to how he makes the images feel and look so horrifying, it kept me on edge. The other thing that Armstrong does well, he makes sure that the acting fits the film’s demented tone. He does a very good making sure that most of the main characters performances are villainous. It helped gave me the reaction that I wanted towards them as most of the characters in the film are sick and repulsive. Armstrong also makes sure that his cast had great chemistry with each other. The scenes between Herbery Lom and Udo Keir were great here. Both of the actors had great chemistry with each other. It helped made me more interested in this film especially towards the end.

The screenplay written by Sergio Sasstner and Perry Parker does a very good job making sure that this was horrifying. One of the things that makes this good was the way they made sure the story was very dark from the start. All the horror scene had a certain level of shock to them. Whether it was the execution scenes to the interrogations scenes, everything generated a reaction. It helped made all the horror aspects of the film work well, as those scenes left me horrified and made me turn away from the screen. The other thing that I liked about the screenplay was the way it develops its main characters. I liked the how the writers do a good job focusing on Lom and Keir’s characters and the beliefs that each of those characters have during the course of the film. Even though they weren’t good, at least one of the characters changes during the course of the film. It makes for some very good exchanges and tension between Keir and Lom’s characters.

The special features start out with the audio commentary track with director Michael Armstrong moderated by Calum Waddell. This was a very good track. I liked how both Armstrong and Waddell cover a lot of things from the production of the film to some of the film’s subject matter to the film’s release and other films of this nature. It made for a very good and interesting track.

The next feature is “Hallmark of the Devil”: an interview with Fangoria editor Michael Gingold. The feature talks about the original release of the film and the gimmicks and retitles that Hallmark Films used on other exploitation releases that made those films successful. It was an interesting interview on the history of those films and how it became successful. It’s worth checking out if you’re into those exploitation films of that era.

After that, is “Mark of the Devil: Then and Now”. This featurette showcases the locations used in the film and how it looks now. Not a bad featurette as it was nice to revisit the film’s locations from the time the film was filmed to now.

After that the disc wraps with interviews from most of the cast, outtakes, trailer and a photo gallery.

“Mark of the Devil” is one of those films that does a great job frightening you with its shock value. It also worth watching for the direction of Michael Armstrong and performances of Hebert Lom and Udo Keir.