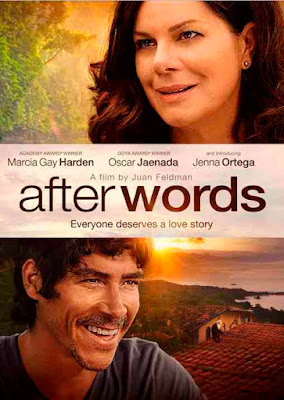 "After Words" hits VOD and theaters in limited release on August 21st.

For more information on this film, you can visit the film's official Facebook page at:  https://www.facebook.com/AfterWordsMovie

Produced and directed by Juan Feldman and written by Joel Silverman, AFTER WORDS focuses on Jane (Marcia Gay Harden), a librarian who attempts to escape her mid-life crisis by traveling to Costa Rica. There she meets a younger man named Juan (Oscar Jaenada) who takes her on an unexpected journey filled with adventure and romance.

“AFTER WORDS takes audiences on a unique and life-affirming journey to beautiful Costa Rica,” said Andreas Olavarria, President of Level 33 Entertainment. “The film features another in a long line of terrific performances by Marcia Gay Harden as well as several wonderful turns by a talented supporting cast led by Oscar Jaenada.”

Juan Feldman added, “After a number of very successful audience test screenings, we are excited to partner with Level 33 to bring AFTER WORDS to audiences across North America. We think people who see the film will discover a heartfelt story, wonderfully played by an array of very talented actors.”
at 6:51 PM
Labels: After Words, Indie News, Level 33 Entertainment, Marcia Gay Harden, VOD News