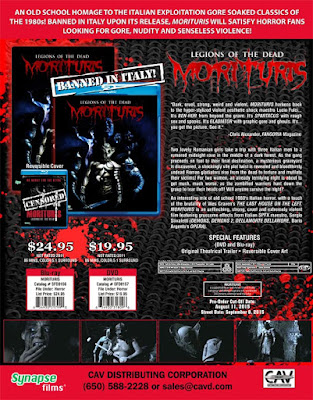 "Morituris: Legions Of The Dead" hits retail on September 8th.

Two lovely Romanian girls take a trip with three Italian men to a rumored midnight rave in the middle of a dark forest. As the gang proceeds on foot to their final destination, a mysterious graveyard is discovered, a shockingly vile plot twist is revealed and bloodthirsty undead Roman gladiators rise from the dead to torture and mutilate their victims! For the two women, an already terrifying night is about to get much, much worse, as the zombified warriors hunt down the group to tear their heads off! Will anyone survive the night? An interesting mix of old school 1980s Italian horror, with a touch of the brutality of Wes Craven's THE LAST HOUSE ON THE LEFT, MORITURIS is an unflinching, strong, cruel and extremely violent film featuring gruesome effects from Italian SPFX maestro, Sergio Stivaletti (DEMONS, DEMONS 2, DELLAMORTE DELLAMORE, Dario Argento's OPERA).
at 12:09 PM
Labels: DVD/Blu-Ray News, Morituris: Legions Of The Dead, Synapse Films