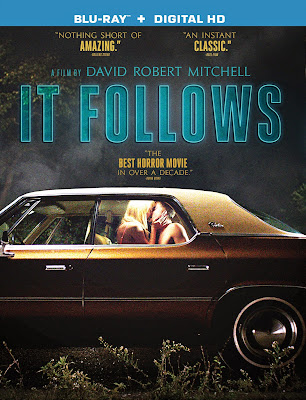 “It Follows” is a film that I’ve heard a lot of great things about. I became interested in seeing this film, after hearing about it during this year’s Sundance Film Festival. Since then, the film has been gaining a level of buzz that hasn’t been seen in a horror release since “Paranormal Activity” back in 2007. The film is the latest from writer/director David Robert Mitchel, whose last film was back in 2010 when he directed “The Myth of the American Sleepover” and stars Maika Monroe from “Labor Day” and Adam Wingard’s excellent film “The Guest”.

The film is about Jay (Maika Monroe), a young nineteen year old girl who falls in love with a man. After having a sexual encounter with the man, she begins to start seeing strange things and people and feels like something is following her at every moment. Now she and her friends look to find out what is happening to her and stop it before it takes her for good. The film also costars Keir Gilchrist (It’s Kind of a Funny Story, “United States of Tara”), Daniel Zovatto (Beneath, Innocence, Laggies) and Jake Weary (Altitude, Fred).

There was a chance going in that this would be a total dud. Thankfully, I was very happy this film lived up to expectations as this might be the best original supernatural film released in a while.

One of the things that makes this film great was its directing from writer/director David Robert Mitchell. He does a great job making sure the look of the film had an old school horror feel. Whether it was the way he and his cinematographer gave the film its bleak look to how Mitchell approaches his scenes, everything had a very eerie feel to it. This allows the scares to be enhanced and made those suspense moments feel intense. The other thing that Mitchell does very well is the way that he directs his cast. He makes sure that the acting aspects help the tone of the film. He doesn’t allow them to fall into the usual traps that other horror films have like the overacting or having them stand out from one another. Instead, it had more of a tone that you’d see in other independent films, which made it work as there were no annoying performances to worry about.

Another thing that I liked about the acting was the fact that it had a strong lead performance from Maika Monroe. She does a great making her character feel like any average teenager. She makes her character lifelike that makes both the horror and dramatic elements in her performance work. If that performance isn’t there then this becomes a boring film quickly.

The film also has an excellent score from artist Disasterpiece. I liked, the way that he goes for more of a John Carpenter/Goblin vibe with the film’s soundtrack. It amplifies all of the scenes in the film, which helps grab your attention especially in the action sequences. This is easily the best scored film that I’ve heard this year. If you love the score, then check out the interview with the artist on this disc.

The screenplay written by Mitchell was very good, as this is one of the best horror screenplays of the year. What makes this screenplay good was the fact the story was different. In an era where remakes and formulaic film dominate the horror genre, it was very nice to see a horror film that has an original story. The characters didn’t feel like the typical characters that you would see in other horror films and the way that he had the characters acted on the page when faced with a situation felt very different. It’s very nice to see a story that has original qualities for once in a horror film. The other thing that I liked about this was the way that it develops the main character. Mitchell makes sure that the character changes during the course of the film as the situation get worse. It makes the character interesting and helps make you interested in the story.

The special features start off with the critic’s commentary track. This track is hosted by Nerdist’s Scott Weinberg and featuring Eric D. Snider (MovieBS), Britt Hayes (Screencrush), Samuel D. Zimmerman (Shock Till You Drop), Alison Nastasi (Flavorwire) and Eric Vespe (Ain't It Cool News). I liked, the fact that the track felt like revolving door as you get different thoughts to why each of the critics like this film so much. It was different from other tracks that I've listen to. The only problem I had with this was the fact you had one person in studio and all the critics come in during various parts of the film via phone. I liked the idea of it but wished it just had two or three of them in studio dissecting every scene but still this was a good track.

The next featurette is “A Conversation with Film Composer Disasterpeace”. This is basically an interview with Disasterpeace, the film’s composer. The interview goes into how he came aboard on the project and how he approached creating the score. It was a good and interesting look at the film’s score that you should check if you love the score for this film.

After that the disc wraps up with a poster gallery and trailer for the film.

I wished there was something on the production of the film from the director and/or cast. It would’ve been nice to have that aspect featured on the Blu-ray.

I wished this Blu-ray had more features and insight from the cast and direction, but still it’s worth a purchase for the film alone. I highly recommend you check this film out, as this is supernatural horror at its best. With its direction, score and lead performance, “It Follows” is one of the best films I’ve seen this year.