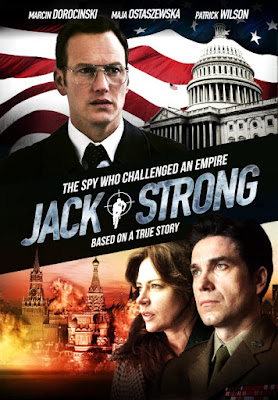 For more information on this film, you can goto: http://www.jackstrongfilm.com

Level 33 Entertainment is proud to announce the release of the gripping international spy thriller JACK STRONG in select theaters across North America and on all Video On Demand platforms beginning July 24, 2015.

The film stars Patrick Wilson (THE CONJURING, INSIDIOUS, TV's "Fargo"), Dagmara Dominczyk (THE COUNT OF MONTE CRISTO, KINSEY), Marcin Dorocinski (SPIES OF WARSAW), and Maja Ostaszewska (IN THE NAME OF) in the true story of one man who dared to challenge the Soviet empire. While planning the maneuvers of the Warsaw Pact forces, Polish army colonel Ryszard Kuklinski (Dorocinski) has access to the top secrets of the Communist Bloc. Upon learning that the American nuclear counterattack against the Soviet forces will be executed on Polish territory, Kuklinski starts a long and psychologically exhausting cooperation with a CIA Agent (Wilson) -- putting his own life and the life of his wife and family in constant danger!