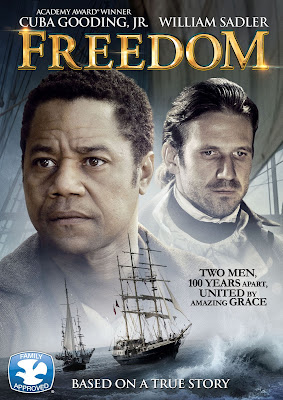 Freedom clearly is a faith based film. If you don’t follow a Christian viewpoint then this movie might not be for you. I felt the acting was very strong. The sets, costumes and atmosphere all was historically right. This is based on a true story about two men, during different time periods. One a black slave, the other a ship Captain transporting slaves. Samuel is a slave, and it is the year is 1856. He and his family escape from there bondage using the Underground Railroad. Throughout this ordeal, they are hunted down like animals. Now Samuel has to fight his inner emotions as his anger and rage slowly start to overtake him. He must come to terms with the idea of Freedom or Revenge. You then are introduced to the year 1748. John Newton is a slave trader, who is taking a ship full of slaves to America. How this ties in is Samuel’s great grandfather was on that ship, and was saved in more than one way by Captain Newton, and Newton was saved in more than one way. The movie is deep and haunting, and very touching at times. The only real flaws with the film is the random characters singing and the script. This is not a musical put yet it is at times. These moments play out like an odd stage style reality. There are moments where the story seems to halt and make sure they press the subject of faith, melding in the pauses and melodramatic soap opera style acting, to make their point. Also the disjointed script jumps back and forth taking away any means to have the film flow with ease.

The strongest point to the film is there is a wonderful cast of actors and actresses. The amazing and underrated Terrence Mann. Mann is always a dynamic performer, and is someone that has great skill in the art form of acting. Also starring the utterly awesome David Rasche. Always a true treat to see perform. The amazing William Sadler, another underappreciated actor that knows how to create memorable performances. Also starring as your lead Cuba Gooding Jr., he does a great job in this role. Also one of the strong points of the film is the acting by Bernhard Forcher. He captures the part of Captain Newton with a flawless understanding of the character. The shining star of the film would go to Diane Salinger. Salinger along with Terrence Mann is perfection together. There two personas and moments in the film stand out in fantastic ways. Also starring Sharon Leal. She is vibrantly beautiful and perfected in the art of performing. Her character was grand.

Freedom is lovingly shot with beauty and creates an image of perfection in that department. The film was made on location in Connecticut which just adds to its ultimate appeal. And hands down the accolades would have to go to the cinematographer Dean Cundey who aced this reality, and created a very beautiful film in the idea of scenery. Really breathless is this setting.

Looking passed the over used religious angle, which I have nothing against, but when a film over uses it, or over states it, it’s like the film is trying to push it, or use it as a point, and ends up drowning the film. Freedom did that in too much of a melodramatic way. Thankfully the acting saved it from this reality. Something I have to mention, is this is the director’s first film, and for it being a first film, I am amazed even with its flaws. Peter Cousens, is an actor, and now has turned director, and did a really good job with the film. For a first time direction, with top notch actors and actress’ I feel this film is worthy to mention, even with all its flaws.

Something else that needs to be mentioned is the amazing music throughout the film, both perfection but yet also it’s odd, weird reality. Singing is placed in spots where the slaves are in groups or singing along with a traveling group of theater people. The music is great, I being a huge music lover, really enjoyed this aspect of the film and felt it was some of the strongest moments of the film, but also was its down fall. Not that the music was bad, because it wasn’t. It’s just that it really didn’t fit. I think it wanted to be a musical, but strayed from it, and yet still added that reality. The storyline is also it’s down fall. There is too much going on, and the back and forth between the subjects of slavery and Newton was too much for one film.

Now this has the Dove Faith Based Stamp of Approval for it being a Family Film. Now this reality is odd considering this film is rated R. There is violence throughout, and many subjects, and moments that might have the kids questioning or getting upset. I think the best choice is for the parents to watch it first, and then decide if the kids can handle it.

Over-looking the flaws and watching and experiencing the acting, sets, costumes, cinematography I feel I was satisfied and entertained with this historical true story. A great drama with yes over used religious antics and some melodramatic performing.

The last thing I have to mention is why you should see this film. Yes it’s flawed with story, and oddness, but there is one performer that brings this film to an excellent degree of amazing, at least his moments. That is the performance by Jubilant Sykes. He is the very essence of music performing. His voice is utterly amazing. His moments in this film, singing is the pivotal moments, and the must see moments. If you don’t like the movie, you will like Sykes singing, because his voice is a music god.