Blu-Ray Giveaway: Enter to Win One of Two Copies of "The Road Within" 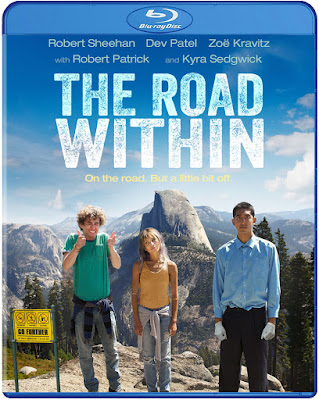 Want to win a copy. You can send an email to facontest@gmail.com.  Please include "The Road Within" in the subject line.

Robert Sheehan (The Mortal Instruments: City Of Bones), Dev Patel (Slumdog Millionaire, Chappie) and Zoë Kravitz (Divergent franchise, X-Men: First Class) star in first-time Director Gren Wells’ THE ROAD WITHIN, debuting on Blu-ray™ and DVD July 7 from Well Go USA Entertainment. The comedy-drama follows a young man with Tourette’s syndrome (Sheehan) who embarks on a road trip with two friends to spread the ashes of his recently-deceased mother. The film also stars Robert Patrick (“Scorpions,” Terminator 2: Judgment Day) and Kyra Sedgwick (“The Closer,” “Brooklyn Nine-Nine”). Bonus materials include interviews with the cast and crew, deleted scenes and the music video “Get It Right” by Oh Honey.

THE ROAD WTHIN has won numerous awards while playing the film festival circuit, including Best Actor for Dev Patel and Best Actress for Zoë Kravitz from the 2014 Napa Valley Film Festival and Gren Wells was named one of the Directors to Watch at the 2014 Palm Springs International Film Festival.