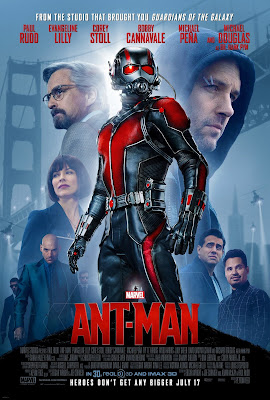 The twelfth film in the 'Marvel Cinematic Universe' is this adaptation of the Marvel Comics' super hero character 'Ant-Man'; who was featured in 'The Avengers' comics, as well as a comic book of his own. Several scenes in this movie are setup for his future inclusion in 'THE AVENGERS' film series, as well as other sequels and Marvel movies. 'ANT-MAN' was directed by Peyton Reed (who's previously only directed sitcoms and comedy flicks, like 'BRING IT ON', 'THE BREAK-UP' and 'YES MAN') and it was written by Edgar Wright, Joe Cornish, Adam McKay and Paul Rudd (Wright was originally set to direct the film as well). Rudd also stars in the movie, as Scott Lang; a highly skilled thief who takes over the role of Ant-Man, from Hank Pym (played by Michael Douglas). The film also stars Evangeline Lilly, Corey Stoll, Michael Peña and Bobby Cannavale. I enjoyed the movie, but I don't think it's nearly as good as Marvel Studios' best.

Douglas plays a former S.H.I.E.L.D. agent, named Hank Pym. Pym was a genius entomologist, and physicist, that created technology, in 1963, which enabled him to shrink in size, but grow in strength (immensely). In present day, he's retired; but he's looking for someone to take over as 'Ant-Man, and continue to use his groundbreaking work, for good. An ambitious former protégé of his, named David Cross (Stoll), has taken over Pym's company; and he wants to use the technology for bad (by militarizing it). Pym, along with his daughter Hope van Dyne (Lilly), set out to stop Cross; who's also known as 'Yellowjacket' (when he's wearing his new shrinking suit). Pym thinks Scott Lang (Rudd), a former systems engineer and crook, is the perfect person to take over, as 'Ant- Man', and help them.

The movie is fun and pretty entertaining, if you like comic book films, but it doesn't live up to the quality of other Marvel Studios' flicks; I think it's their weakest movie (it's even worse than 'THOR: THE DARK WORLD', in my opinion). The action scenes are kind of underwhelming and the whole film just feels like it was made on a much smaller scale (I can't believe it had a $130 million budget). The jokes aren't funny, and a lot of the dialogue is pretty cheesy; as well as the score music. I think the film probably would have been a lot better if Rudd and McKay hadn't rewritten Wright and Cornish's script; and if Wright had directed it. Reed seems like an OK director, but he's no Edgar Wright, and Rudd's comedy skills are definitely not their best here. Too bad Marvel Studios' is so afraid of innovative and original art; they make good movies, but they could be even better, if they actually had some balls!
at 8:35 PM
Labels: Ant-Man, Marvel Studios, Paul Rudd, Reviews