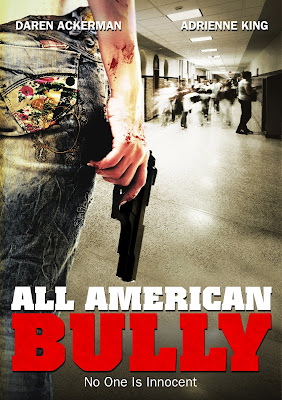 A short while after I had started watching All American Bully (written and directed by Jason Hawkins, whose previous work includes nothing I’ve ever heard of), I thought to myself, “Y’know, for a low budget indy flick in which the biggest star is a chick known only for not dying in a few Friday the 13th movies, this pretty good.” By the time the movie was over, I thought to myself, “This is one of the most messed up movies I’ve ever seen.” The truth of the movie is probably somewhere in the middle.

All American Bully starts off as the story of three close friends, Devon (Alexander Fraser), Becky (Alicia Rose), and Garrett (Darren Hicks), who are a bit nerdy and quiet. One day on the way to school, Devon is bullied by John (Daren Ackerman), who was his best friend when they were young kids. It turns out that John has been bullying Devon and his friends for a while, and it culminates when John and his friends, including his girlfriend Shelly (Dara Davey) beat the living hell out of Devon. Devon eventually confides in Becky, who is in love with him, the reason for John’s animosity towards him: Devon knows that John is secretly gay. Becky talks Devon into retaliating against John by putting a video online in which they threaten to reveal John’s secret… which sends John into a murderous rage, because John has multiple secrets, and the one he thinks they’re talking about is much, much darker. The violent, terrifying confrontation and revelations that follow will devastate them all. It’s a very good plot, and the close, almost claustrophobic indy style in which it is filmed gives the whole thing an intimate feel that perfectly fits the mood and story. The problem is that once Devon and Becky upload their video, the plot undergoes a bit of a tonal shift, and unfortunately it isn’t for the better. All American Bully is initially a story about bullying that, yes, is one we’ve all heard before, but it starts off seeming like it’s going to juxtapose modern cyberbullying with the “classic” kind, and look at the horrors involve in both and what sets them apart. Instead, it basically dissolves into torture porn around set around a Lifetime Original Movie plot. The climax is filled with originally smart characters doing stupid things as the revelations get more absurd and what they choose to do about them more twisted and uncomfortable to watch. The acting isn’t bad for what it is, with most of the cast holding their own decently well. The exception is Ackerman, who is fine when John is the tough bully, but goes way too over the top when John falls apart and has to deal with his secrets. Also, while talking about the cast, I have to add the movie is unfair in that it bills Adrienne King (Alice from the first two Jason movies) as being the star when she has about five minutes of screen time in a mostly toothless, inconsequential role.

If All American Bully had stayed the course and gone the psychological route that it initially sets up, it could have been a much better movie. But it instead goes for shock and violence, which of course have their place, but it doesn’t do them justice and it leads the movie to a flat, sudden ending. I’m giving the movie a star and a half out of five, and wishing for the better movie it could have been.
at 1:04 PM
Labels: All American Bully, Reviews, Wild Eye Releasing