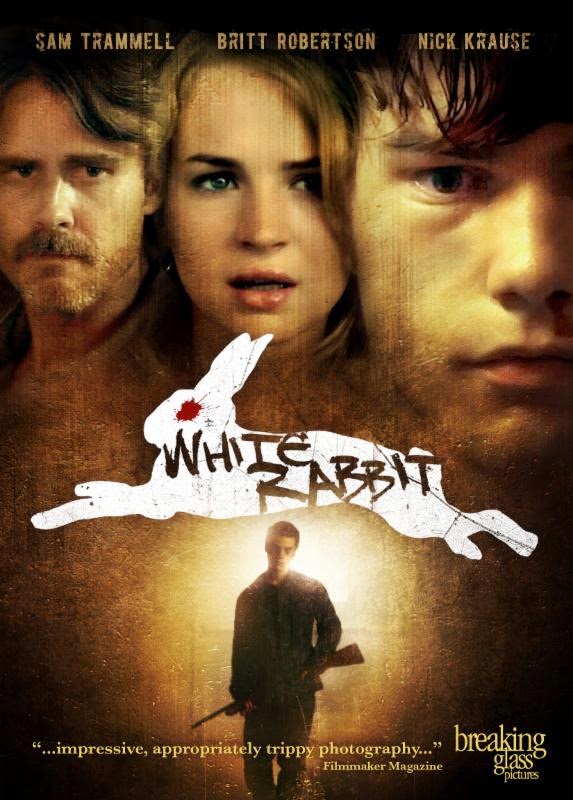 White Rabbit is an interesting movie, to say the least. Written by Anthony DiPietro and directed by Tim McCann, the easiest way to describe this movie is to say it's sort of a cross between Donnie Darko and Bowling for Columbine. You might imagine a pairing like that could result in a fascinating movie, especially if it's written, directed, and acted well, which White Rabbit is. But sometimes things don't always work out the way they could.

White Rabbit centers around Harlon Mackey (played mostly by Nick Krause except for some flashbacks where he's played by Kelsey Baker and Robert Michael Szot), who as a young boy is taken hunting by his drug addict father Darrell (Sam Trammell) and is forced to shoot and kill a rabbit. After this event Harlon, a shy, quiet boy, grows into an even more reclusive teenager, picked on and bullied at school where he has just one friend named Steve (Ryan Lee), whose home life isn't any better than Harlon's. While Harlin's mother Ruby (Dodie Brown) is okay, she's overruled by Darrell. Harlon uses comics and magazines to hide from the verbal abuse he receives at home, and hallucinating the images and voices of both the comic characters he reads about and the bunny he killed are common occurrences for him. A fateful chain of events is set off for Harlon when he and Steve find a stray puppy, which leads to an altercation at Steve's house. The timing coincides with Harlon meeting a captivating goth girl named Julie, (Britt Robertson) who he immediately falls for. Unfortunately, the chain of events spirals beyond Harlin's control, and as he loses everything he loves he finds himself at school with the gun he used long ago to kill the rabbit, wondering which of the voices in his head are real, and which he should listen to.

I won't say anything more about the plot so as to avoid spoilers, but I will say this: for me, the ending was way too open to interpretation for my liking. It's an approach that works in some movies, but the way this one plays out, I would have been much more satisfied by a definitive ending. It detracts from an otherwise solid film. The writing is tight and the plot sucks you in. It's well directed and paced perfectly. It also boasts some impressive acting, with Trammell, Robertson, and Krause all shining pretty brightly. A stronger ending would have earned this movie an extra star, but instead it'll have to settle for three stars out of five.
at 7:42 PM
Labels: Breaking Glass Pictures, Britt Robertson, Reviews, White Rabbit