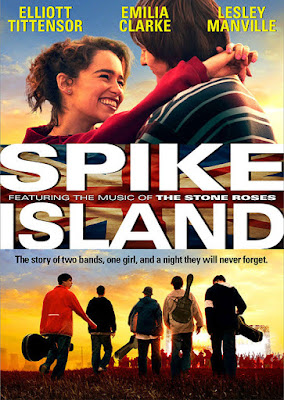 For more information on this film, you can visit the film's official Facebook page at:https://www.facebook.com/SpikeIslandUS

SPIKE ISLAND was written by Chris Coghill and directed by award winner Mat Whitecross (Winner – Independent Spirit Award for The Road to Guantanamo). The film was produced by Esther Douglas and Fiona Neilson and was executive produced by the members of the band Coldplay. Additionally, SPIKE ISLAND was nominated for a British Independent Film Award for Most Promising Newcomer (Elliott Tittensor).

SPIKE ISLAND is a coming-of-age story about a wannabe rock band in Manchester, England, who hatch a plan to hand-deliver their demo tape to their idols, The Stone Roses, at the band's impending gig at Spike Island. But when their tickets fail to materialize, the gang embarks on a road trip to the concert and is forced to take extreme measures to sneak their way in! Along the way, friendships are tested and their futures are shaped -- together or apart.

“We’re thrilled to have the opportunity to bring SPIKE ISLAND to audiences across North America,” said Andreas Olavarria, President of Level 33 Entertainment. “The movie is filled with youthful energy, great music and terrific performances that are sure to entertain a broad range of filmgoers – especially fans of The Stone Roses and of Emilia Clarke, who plays a very different role from her well known character in HBO’s Game Of Thrones.”