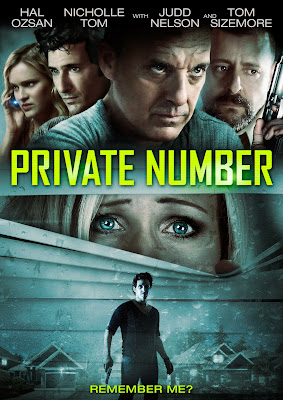 Private Number’s plot, being about a writer working on a novel who is slowly driven crazy by forces outside his control, had me instantly interested in the movie. It’s a plot I can certainly relate to, but that’s another story. As such, I really wanted to like Private Number (written and directed by LazRael Lison), and there are certainly parts of it that are good, they are far outshone by the bad.

As Private Number begins, Michael Lane (Hal Ozsan) is hard at work on a follow-up to his successful first novel. He’s a recovering alcoholic who has been sober for a year. His wife Katherine (Nicholle Tom) really wants to have a baby, but he isn’t ready. Michael’s Alcoholics Anonymous sponsor, Jeff (Tom Sizemore) is worried about him, and Sheriff Stance, sheriff of the small town they live in, doesn’t like or trust him, either because of Michael’s alcoholic past or because he keeps to himself too much; like a lot of things about this movie it isn’t ever really made clear. Michael starts getting phone calls in the middle of the night from a private number, and the calls are just different voices asking, “Remember me?” Katherine hears the phone calls too, so we know Michael isn’t hallucinating… until he starts seeing things, too. From that point Private Number begins to try to straddle the line between ghost story and psychological thriller, but unfortunately it alternates between falling too far to one side or the other to ever really achieve the best of both worlds effect that it seems to be going for. One thing I’ll say in the plot’s defense is that it keeps you guessing as to what’s really going on. It isn’t a spoiler to say that a murder is eventually discovered, and it’s Michael’s frantic search for the truth as his sanity unravels that pushes the action forward; while it does, it does a decent job of keeping you guessing as to who the killer is, but for me at least the reveal and fallout at the end is a complete copout.

While the plot has potential, the writing tends to be clichéd and the characters are mostly just caricatures: the mistrustful sheriff, the wise sponsor, the shrill wife, etc… The directing isn’t much better, with plenty of sketchy jumps and shots that obscure the action instead of highlighting it, while simultaneously making the whole thing seem more grandiose than it is, with extra lighting and sound effects that distract more than they do anything else. The acting is of a kind as well, with both leads being one-note and over-the-top. Sizemore and Nelson could have possibly changed things, but they were only in the movie for maybe five minutes each, and never simultaneously.

In the end, Private Number is a movie that had potential, but was overshadowed by a writer/director and cast that overdid absolutely everything. Unfortunately, I can’t rate potential, so this movie gets just one star out of five.
at 4:18 PM
Labels: Arc Entertainment, Private Number, Reviews