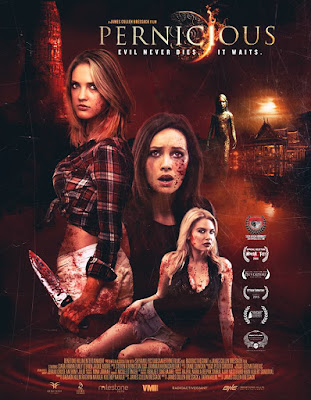 When I first I heard about “Pernicious”, I wasn’t sure that I would be interested in seeing this film. But lately, the film has been getting a lot of press from some of the major horror sites. Still, I wasn’t sure if this was all hype or this is a very good film.

The film follows three women (Ciara Hanna, Jackie Moore and Emily O’Brien) who travel to Thailand for the summer to teach English. They are also looking to experience the sights of the country. But what is waiting for them is something they least expect. Their trip starts to become a nightmare when the people that just met at a night club all of a sudden go missing. If thing couldn’t get worse, they start having trouble sleeping as a statue haunts them. Now they must find a way out of their predicament before they sleep forever.

The credit goes to director/co-writer James Cullen Bressack, as the direction was very good. What I liked about his direction was that he’s able to make the film feel scary. From the way the gore effect were executed to how the scary images were effectively crafted on screen, everything gave me that edge of your seat feel. When that happen, it grabs you’re interest. Bressack also does a great job making sure the performance were also good. Whether its way the horror scenes were acted to making sure his cast makes their characters interesting, he does a great job making sure the performances fit the film’s bloody and creepy tone. Speaking of the performances, I thought the three main actresses Ciara Hanna, Jackie Moore and Emily O’Brien were very good here. I liked how they had good chemistry with each other and the ability to play off of each other. They make sure that their performances fit the film’s tone and keeps your interested in the film. It’s one of the best things about this film.