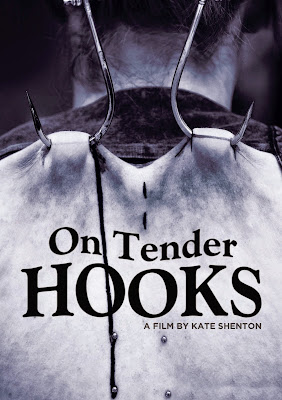 When I first heard about “On Tender Hooks” in a press release, I discovered the subject matter of the documentary was different than other documentaries that I’ve heard of. I knew about body modification as that subject is dealt with the Soska Sisters “American Mary” but I never knew about the suspension part of body modification. That coupled with the film’s trailer drew my interest in wanting watch this documentary.

The film is a look into the world of body modification and suspension community. It’s told through the film’s director Kate Shenton, who documents her journey into this subculture as she interviews people who embrace the subculture and takes part in a session. This is a very interesting look into the bizarre subculture which some may be shocked with the subject matter that is dealt with.

As much of a horror fan that I am, I didn’t know if I could stomach watching “On Tender Hooks” because of it subject matter and the fact this is real. Surprising, I had no problem watching this film. It was one of those films that I couldn’t take my eyes off of as I was fascinated by the culture and the people. This was a very interesting documentary from start to finish.

One of things that I like about this documentary was the fact that it had a raw feel. Director Kate Shelton does a very job making sure the whole culture of body modification and suspension is engaging to people like myself who are discovering the first time. She does a very good job making sure it highlights the process on it and people who perform it and do it. It’s done in a manner that it makes them feel like people that you would see in other documentaries, as were some very interesting people that you come across in this film.

The film was also presented very well from both a picture and structural standpoint. Whether it’s the way the film was filmed to how everything was presented, it made some of the film’s images and the subject fascinating instead of feeling grossed out about the subject. Shelton also does a very good job making sure the structure of the film worked within the overall context of the film. It’s not structured in the traditional documentary method. It has the normal stuff that you see in a regular documentary as it follows these people and the reasoning to why they perform this. It also gets the perspective of the director as she part takes in suspension. That aspect helped give the film its uniqueness as it doesn’t feel like a traditional documentary, it feels more like a journey that the director goes on, which I got a sense by the end of the film.

“On Tender Hooks” is one of those films where the subject matter might gross out some people with the images but it’s a very interesting look at the world of body modification and suspension.