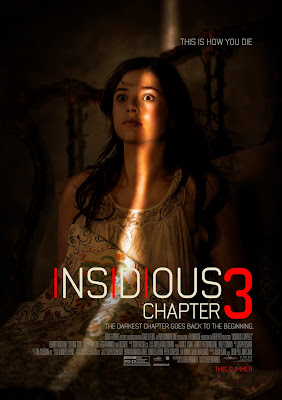 In the interest of full disclosure, I should admit that the Insidious series has easily become one of my favorite horror series of all time, if not my outright favorite, so impartiality isn’t a simple thing for me when it comes to reviewing Insidious: Chapter 3. That being said, I have to admit that Chapter 3 did have some flaws, but overall I found it to be better than Chapter 2, which honestly had a bit of a bloated storyline, but not as good as the original, which I absolutely loved.

Written and directed by Leigh Whanell (also the writer of the first two, but not director; that job in both cases fell to James Wan),Insidious: Chapter 3 is a prequel to the first installment. It begins an unknown amount of years before the haunting of the Lambert family, and focuses on Quinn Brenner (Stefanie Scott), a teenage mourning her mother and looking for a way to contact her beyond the grave. Her quest brings her to the home of psychic medium Elise Rainier (Lin Shaye, who played the same role in the first two installments), who has retired and refuses to help her except to offer her the free advice to stop trying to contact the dead before the wrong spirit answers her. Of course, her warning comes too late, and Quinn begins to be haunted by a spirit who wears a breath mask and wants to possess her soul. The Man Who Can’t Breathe (Michael Reid Mackay) throws her around, hits her, chokes her, and physically moves her to places she couldn’t possibly get to on her own. It’s this last bit that convinces her father Sean (Dermot Mulroney) that something supernatural is happening to his daughter, and he eventually convinces Elise to help, as well as returning characters Tucker and Specs, which explains how they hooked up with Elise in the first place. Throughout the plot, Insidious: Chapter 3 is a tight, thrilling ghost story full of jump scares that actually work and real tension the audience can feel.

What makes the movie, though, are its heart and its performances, something it shares with the rest of the franchise. The movie is moved along by the love of a daughter for her mother, and a father for her daughter. Stefanie Scott is great as the victim, and is terrific at making her fear and pain feel real. Mulroney, who I usually can barely tolerate, is just as good as a desperate father. The real star is Lin Shaye, though. Her portrayal of Elise is truly memorable, filled with emotion and growth as she takes her from refusing to help because of her fear that the Bride in Black (a connection to the first two, simultaneously a callback and a bit of foreshadowing as well and not the least of the touches that ties the movies together) will kill her to a strong warrior fighting for Quinn’s soul.

Insidious: Chapter 3 packs scares and heart in equal measure, and wraps them both up in a decent amount of fright and, of course, The Further, the series’ hallmark. It all combines to make for a truly memorable horror movie, one of the best I’ve seen in recent years. I give it four stars out of five
at 5:19 PM
Labels: Focus Features, Insidious: Chapter Three, Leigh Whannell, Lin Shaye, Reviews