"Inside Out" Review - Written by Tim Hellman 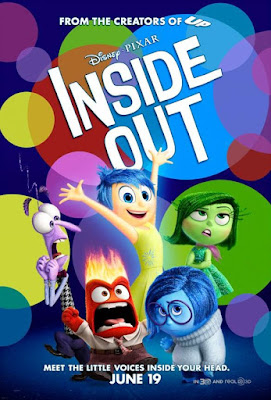 'INSIDE OUT': Four and a Half Stars (Out of Five)

Pixar and Disney's new computer-animated fantasy film, about a young girl that's guided through the struggles of moving, and the frequent absence of her father, by her emotions; which are personified, with individual personalities of their own. The movie was directed by Pete Docter and Ronaldo Del Carmen and it was written by Docter, Carmen, Meg LeFauve and Josh Cooley (Docter has co-written and directed other popular Pixar flicks, like 'UP' and 'MONSERS, INC.'; as well as co-wrote 'WALL-E' and 'TOY STORY' 1 & 2). It features the voice talents of Amy Poehler, Phyllis Smith, Richard Kind, Bill Hader, Lewis Black, Mindy Kaling, Kaitlyn Dias, Diane Lane and Kyle MacLachlan. The concept for the film has been done many times before (most notably on the 90's TV sitcom 'HERMAN'S HEAD') but it's still a very imaginative and well made kids' film!

Riley (Dias) is a young girl, growing up in Minnesota, who has five voices inside her mind; guiding her every decision, and feeling. They're Joy (Poehler), Sadness (Smith), Fear (Hader), Anger (Black) and Disgust (Kaling). Joy is in charge of keeping Riley primarily happy, but she's constantly struggling with how to deal with Sadness. When Riley is forced to move to San Francisco, at age 11, and her father (MacLachlan) is constantly away at work, things become really challenging for Joy. Especially when Joy and Sadness are thrown out of the headquarters, inside Riley's mind, and have to make a journey back to it, in order to restore Riley's mental stability.

I grew up on 'HERMAN'S HEAD'; I used to watch it all the time when I was a kid, so when I first saw the trailer for this film, I wasn't very impressed. It seemed like a rip-off and it also just didn't look that good to me. So I had low expectation for the movie, until I heard all the rave reviews for it, from critics and audiences alike. After seeing the film, I can say it's not a blatant rip-off; and it does have plenty of fresh ideas and creativity of it's own. Although the premise isn't original, it does deal with it in a interesting and entertaining way; the whole world, inside Riley's mind (the film creates) is very fascinating. I do wonder though, if we all have people inside our heads, guiding us through life, do they all have people inside their heads too, guiding them, and so on? The humor is kind of childish but it does have a very positive message; about dealing with depression, and life struggles, that I think could be beneficial for every kid to see. It might not be one of the most original Pixar films, but it is one of it's best (in my opinion).
at 2:34 PM
Labels: Inside Out, Pixar, Reviews, Walt Disney Pictures