Get "Unfriended" on DVD and Blu-Ray 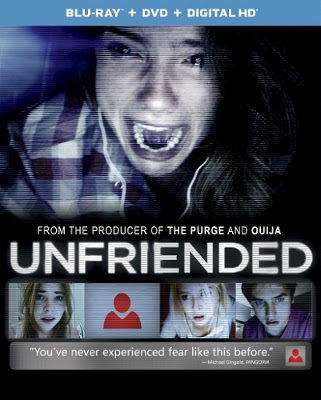 For a group of teenage friends, a devastating fate lurks on the other side of a computer screen in Unfriended, the first in a new generation of found-footage thrillers coming to Digital HD July 28, 2015 and Blu-Ray™, DVD and On Demand August 11, 2015, from Universal Pictures Home Entertainment. Unfriended is a startlingly contemporary nail-biter from two modern masters of mayhem, executive producer Jason Blum (The Purge, Ouija, Sinister) and producer Timur Bekmambetov (Abraham Lincoln: Vampire Hunter, Wanted).

What starts as a seemingly innocent online prank produces a sequence of events that spirals out of control. During a routine group video chat, high-school friends are terrorized by an unseen figure. The anonymous intruder implicates each of them in the death of an acquaintance, revealing damning secrets and transforming trusted allies into wary adversaries. Forced into a sordid "game," the teens try to figure out who is behind the mysterious threat, but all signs point to a power from beyond the grave. Playing out in real time almost entirely on a computer screen, Unfriended features a rising young cast that includes Shelley Hennig (Ouija, "Teen Wolf"), Moses Storm ("The 4 to 9ers: The Day Crew," "About a Boy") and Renee Olstead ("The Secret Life of the American Teenager," "Still Standing").
at 11:17 AM
Labels: DVD/Blu-Ray News, Timur Bekmambetov, Unfriended, Universal Pictures