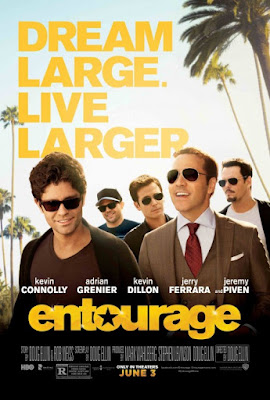 'ENTOURAGE': Four Stars (Out of Five)

Big-screen continuation of the popular HBO TV series, of the same name, which ran from 2004 to 2011. The show revolves around a popular movie star, named Vincent Chase, and his entourage of close friends, and brother. It was greatly inspired by the true story of actor/musician Mark Wahlberg (who served as a producer on the film, and executive producer on the show), and his entourage of friends and family. The series creator, Doug Ellin, served as the movie's director and co-writer (with Rob Weiss). Actors Kevin Connolly, Adrian Grenier, Kevin Dillon, Jerry Ferrara and Jeremy Piven all reprise their roles from the show. It also costars Haley Joel Osment, Billy Bob Thornton, Emmanuelle Chriqui (also reprising her role from the show) and Ronda Rousey (Wahlberg, and many others, also have cameos in the movie). I really enjoyed it!

The film picks up six months after the end of the TV show; at a time when Vincent Chase (Grenier) just separated from his wife, after only 9 days of marriage. While looking for more purpose, in his life, Chase decides he wants to direct the next movie he stars in. He calls up his old agent, Ari Gold (Piven), who's now the head of a very successful studio, to secure him the right project. Eight months later, the massively budgeted sci-fi epic'HYDE' (Vincent's directorial debut) is going over budget. This causes a lot of problems for Ari, Vincent and Vincent's friends (Connolly, Ferrara and Dillon); who all have problems of their own.

I only watched the first season of the TV series, so I hadn't kept up on what happened to any of the characters, since, but I still really enjoyed this movie (I think most people can see it, and have fun with it, without watching the show). It's a little sexist, and full of male fantasies, but I've heard that's what Hollywood is really like. The film does have an awesome, and very empowering, performance from Ronda Rousey; to counter some of the male chauvinism. It's also got great performances from Piven and Dillon (as the TV show does), and it's just really, really funny. What I most like about the movie though, and the TV show, is how much of an insightful look, it is, on the film industry. Being a huge film fan, and low budget filmmaker myself, I really enjoyed this movie (and the first season of the show), for that reason (despite it's obvious sexism). I think fans of the series will be more than pleased!
at 12:44 PM
Labels: Entourage, Mark Wahlberg, Reviews, Warner Brothers