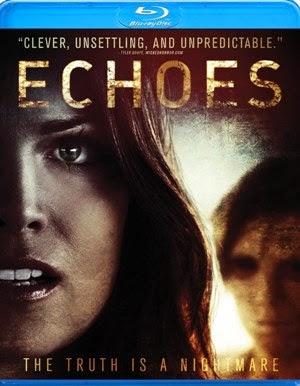 I’ve love Supernatural films when they’re done right. So when I first heard about “Echoes”, I was interested in this because of the quotes on the box. Still, I’ve been duped by films with good box quote and ended up hating up. So I went into this one with an open mind.

The film follows a young writer who’s having trouble sleeping at night. She’s having visions of a dead person. She decides to take a vacation to her boyfriend’s house in hopes of the vision would go away. But once there, she starts to find out that her visions are become worse. Is she losing her mind or she is she being possessed? Supernatural films tend to be hit or miss with me. It based more on how much scares the film provides. This film had a couple of scary moments but what made me enjoy this was the fact it felt more like a cerebral horror film than a straight up supernatural horror film.

Most of the credit goes to director/writer Nile Tims. One of the things that makes this very entertaining was the visuals that were in the film. Tims along with his director of photography does a very good job making sure the desert setting comes off very well on screen. It helped make some of the key moments in the film look very professional and added to the film’s dark mind bending tone. The other thing that Tims does very well is making sure the key performances were very good. Whether it was the way that he approaches his direction of his cast to having the performances fit them film’s tone, it kept me interested in the story and the main character. When that happens, it makes films like these good to watch.

The screenplay written Tims was a good one. One of the things that his screenplay does well is develop everything. From the mental state of the main character to her trying to find out why she is being haunted, it makes the story and the main character interesting to watch. The story was a little slow at times but it works for this type of story. The other thing that I liked about this screenplay was the fact the film has a consistent tone from start to finish. Tims does a very good job making sure the tone of the film is very dark. It made all the psychological element work so well with everything that goes on in the film.

After a bad string of horror films, it was nice to enjoy this one. With its good direction and Kate French’s performance, “Echoes” is a creepy psychological film that keeps your interest.