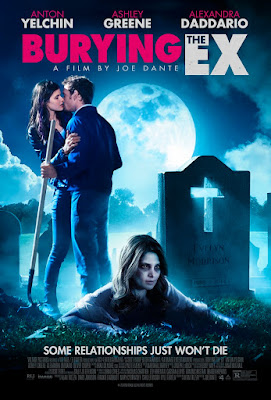 'BURYING THE EX': Three Stars (Out of Five)

Indie horror-comedy flick, about a guy who's tormented by his dead ex-girlfriend; she was a bitch when she was alive and now she's even bitchier, as a zombie girlfriend from Hell (who just won't leave)! The film was directed by Joe Dante (the acclaimed cult filmmaker responsible for such sci-fi and horror-comedy classics as 'GREMLINS', 'THE HOWLING', 'EXPLORERS', 'INNERSPACE' and 'THE 'BURBS'). It was written by first-time feature film writer Alan Trezza (and based on the 2008 short, of the same name, that he wrote and directed). The film stars Anton Yelchin, Ashley Greene, Alexandra Daddario and Oliver Cooper. It had so much potential; but Dante has definitely lost his touch, in recent years.

Yelchin plays Max and Greene plays his domineering girlfriend, Evelyn. Max really wants to break up with Evelyn, but has been lacking the courage to do so. When Evelyn is hit by a car, and killed, it seems like Max's problems are solved. They get even worse though, when Evelyn comes back to life and is even more controlling.

The film is funny, the acting is decent and the soundtrack is awesome. It's kind of a fun movie, but not that fun. I just expect a lot more from Dante; who like I said, has made a lot of classic horror-comedy films ('GREMLINS' and 'THE BURBS' are two of my all-time favorites). This movie has a great premise, and it had a lot of potential, which makes it all the more disappointing. I really wanted to like it, but I'm sad to say it's only mildly amusing.
at 8:11 PM
Labels: Alexandra Daddario, Anton Yelchin, Burying the Ex, Image Entertainment, Joe Dante, Reviews