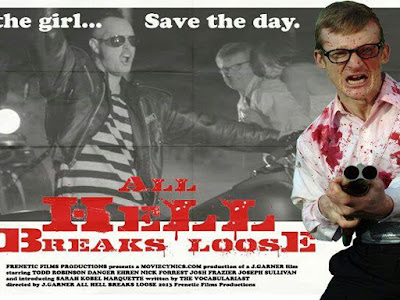 'ALL HELL BREAKS LOOSE': Four and a Half Stars (Out of Five)

Ultra low-budget indie 'grindhouse' flick; about a biker gang from Hell, collecting virgins to sacrifice to Satan, and a slain wimpy nerd, revived by God himself (over and over again), on a mission to stop them. The film was directed by first time feature filmmaker Jeremy Garner and written by first time feature film writer 'The Vocabularist'. It's the first feature produced by Frenetic Films (an Oregon based film company) and it was shot on a budget of just $20,000, in three weeks, in (and around) Eugene, OR. The movie stars a cast of mostly unknown Oregon actors; including Nick Forrest, Todd A. Robinson, Ehren McGhehey (aka Danger Ehren, of 'JACKASS' fame), Joshua Lee Frazier, Sarah Kobel Marquette, Joseph Sullivan and Hunter O'Guinn. If you're a fan of sleazy and gratuitously violent B-movies, you'll probably really enjoy this film (like I did).

The story revolves around a motorcycle gang, literally from Hell, called Satan's Sinners. They're viciously hunting down virgins, to sacrifice to Satan, and brutally killing anyone in their way. They murder a nerdy virgin, named Nick (Forrest), on his wedding day; and kidnap his wife, Bobby Sue (Marquette). A cowboy (Sullivan), claiming to be God, then shows up, and magically brings Nick back to life; so he can rescue his wife, and stop the evil biker gang. Although Nick is extremely weak, and inexperienced, he'll stop at nothing to save Bobby Sue; even if it means he has to die, very violently, multiple times.

The movie has some obvious production flaws, at times (some poor audio, weak acting and cheesy dialogue), but that's to be expected from a film like this. You can't go into a micro-budgeted B-horror flick, and not expect these things. It also has some pretty graphic violence, and a decent amount of explicit nudity, so it's definitely not a movie for everyone; but I think fans of the genre will be more than pleased. For debut filmmakers, on such a limited budget, the movie is very impressive! It's also a lot of fun! Some of the performances are pretty good (I especially like Forrest, in the lead), and the characters are all quirky and entertaining. Those looking for a lot of gruesome gore, and raunchy distasteful jokes (including a lot of dark religious humor), definitely should find what they're looking for. I love this type of 'Rodriguez and Tarantinoesque' grindhouse action flick, and this one definitely doesn't disappoint.
at 12:40 PM
Labels: All Hell Breaks Loose, Frenetic Film Productions, Reviews