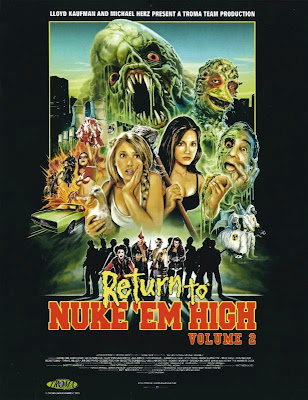 For more information on this Kickstarter campaign, you can goto: https://www.kickstarter.com/projects/return2nukeemhigh2/return-to-nuke-em-high-volume-2-by-troma-entertain

For more information on this film, you can visit the film's official Facebook page at:   https://www.facebook.com/ReturnToTheClassOfNukeEmHigh

Greetings from Tromaville! The Troma Team launched its official Return to Nuke 'Em High: Volume 2 Kickstarter campaign today--inspiring $4,000 worth of donations in only 3 short hours. The campaign, which aims to raise $50,000 for post-production costs on the "explosive" final installment of Lloyd Kaufman's two-part Return to Nuke 'Em High saga, was announced this week on Buzzfeed.

"Principal photography has wrapped and we've assembled a working cut of the film we know the world will love," says the official Kickstarter. "All that remains are the post production costs: sound mixing, color correction, editing, special effects, mastering, etc. Your generous support will get our movie completed and enjoyed by film fans all over the world!"

The official video for the campaign prominently features the reclusive Vice President of Troma Entertainment, Michael Herz. Appearing for the first time in 15 years, Herz introduces the project and invites Troma's many fans to "help us complete what I consider to be the finest Troma film of all time." Herz is joined by Kaufman and Return to Nuke 'Em High stars Catherine Corcoran and Asta Paredes.

Troma is offering backers a multitude of "Tromazing" prizes for their generous support, including "valuable one-of-a-kind props from the movie, a weekend visit at Lloyd Kaufman's crib, and even prestigious credits in the finished film." Prizes also include Return to Nuke 'Em High: Volume 2 Blu-rays, posters, and other exciting items.

Troma fans and genuine independent art lovers have already have shown their support on Kickstarter. They've also taken to social networking sites, where the hashtag #SaveNukeEmHigh has gained significant traction.