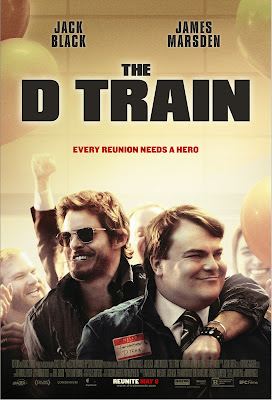 'THE D TRAIN': Four and a Half Stars (Out of Five)

Jack Black and James Marsden star in this dark comedy, about a forgotten high school nerd, who attempts to convince the most popular guy from his graduating class to come to their 20-year reunion. The film was written and directed by Andrew Mogel and Jarrad Paul (in their directorial debut). It also costars Kathryn Hahn, Jeffrey Tambor, Russell Posner and Mike White. The movie is hilarious, full of dark twists and also surprisingly insightful!

Dan Landsman is the self appointed head of his high school reunion committee (from the class of 1994). He wasn't popular in school and his fellow alumni members still treat him like shit. After seeing the most popular guy from their class, Oliver Lawless (Marsden), in a Banana Boat TV commercial, he decides to track him down in LA, and convince him to come to their reunion in Pittsburgh; in order to attract more former class members into attending. He makes up several lies, in order to accomplish his mission, including a fake business trip; which gets him into a lot of trouble. This causes complications in his relationships with his boss (Tambor), wife (Hahn) and son (Posner); but he has a great time bonding with Lawless, in the process.

The movie takes a really dark turn, at about the halfway point, which leads to some hilarious laugh out loud moments; throughout the rest of the film. I think it's one of Jack Black's best performances, as well as James Marsden's; who's became a brilliant comedic actor in recent years. The script is clever, and smart, and it's also a great character study; that's brilliantly directed. It's definitely a different movie than I thought I was going to see. It's also got some great 80s style music, and it just feels like a classic comedy film. It's also very relatable, to me; especially since my 20-year high school reunion is coming up (which I don't plan on attending). It's definitely a movie I'll remember!
at 9:12 AM
Labels: IFC Films, Jack Black, James Marsden, Reviews, The D Train