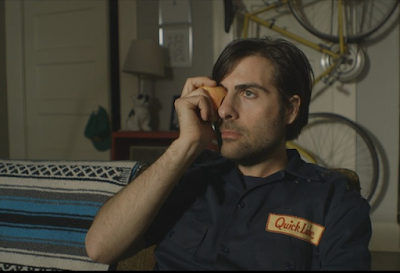 No details of a U.S. release at this time.

Spotlight Pictures continues to add to its robust slate on the Croisette and has announced foreign sales rights for 7 CHINESE BROTHERS written and directed by Bob Byington (Somebody Up There Likes Me). The film is produced by Seana Flanagan, Molly Christie Benson, and Nancy Schafer, and executive produced by Christos V. Konstantakopoulos of Faliro of House Productions. The highly-anticipated 7 CHINESE BROTHERS stars Jason Schwartzman (The Grand Budapest Hotel, Rushmore), Tunde Adebimpe, Eleanore Pienta, with Stephen Root (Office Space, “NewsRadio”) and Academy Award Winner Olympia Dukakis (Moonstruck, Away from Her). Matt McCombs, Spotlight CEO made the announcement today.

"We are thrilled to be working with such talented cast and filmmakers,” said McCombs. “I have long been a fan of Jason Schwartzman and his eclectic ground breaking films such as RUSHMORE and I HEART HUCKABEES."

CHINESE BROTHERS tells the story of Larry (Schwartzman), a hapless unemployed man, with a callous outlook on life. As Larry bounces from one job to the next, he falls for his new supervisor (Pienta) while working at a quick lube station. In order to get the girl, he must now get his act together.

The film premiered at this year’s South By Southwest and garnered rave reviews. The Hollywood Reporter called it "Very Funny" and Newsweek described it as "Charming."

"We are excited to have Spotlight Pictures on board selling 7 CHINESE BROTHERS internationally at Cannes. They are passionate supporters of the film, and we are thrilled by this partnership," added producer Flanagan.

Sales are currently being held at the Cannes Film Festival; the deal was announced today by Spotlight Pictures’ Head of Acquisitions & U.S. Sales Carlos Rincon and producers Seana Flanagan and Nancy Schafer.