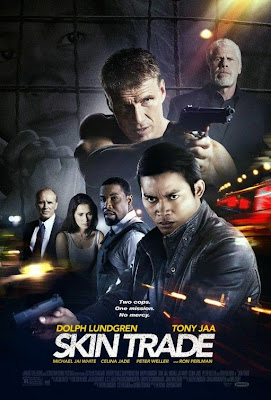 'SKIN TRADE': Three and a Half Stars (Out of Five)

Dolph Lundgren co-wrote and co-stars in this martial arts action flick, alongside Thai superstar Tony Jaa; in his American film debut (in a lead role). Lundgren and Jaa play NYC and Thai detectives, taking on human traffickers in S.E. Asia. The movie was directed by Ekachai Uekrongtham and written by Lundgren, Gabriel Dowrick, Steven Elder and John Hyams (doing uncredited rewrites). It costars Michael Jai White, Ron Perlman, Peter Weller and Cary-Hiroyuki Tagawa. For a low budget B action flick it's pretty well-made; but how can you go wrong with this cast (it's an action movie lover's dream)!

When NYC cop Nick Cassidy (Lundgren) kills the son of a Serbian gangster, Viktor Dragovic (Perlman), his wife and daughter are killed, out of revenge, and Nick ends up in the hospital. When he gets out, he goes rogue and tracks Dragovic to S.E. Asia; the mobster runs a human trafficking ring there. Nick is then pursued by a corrupt F.B.I. agent, named Reed (Jai White), and a Thai Detective, named Tony Vitayakul (Jaa); Tony thinks that Cassidy killed his partner. Nick will stop at nothing to avenge his family and put a stop to the human trafficking network.

The movie reminds me, a lot, of old 80s and 90s buddy B action films; most notably 'SHOWDOWN IN LITTLE TOKYO' (starring Lundgren and Brandon Lee). It's better made though. With a budget of $9 million, the film has decent enough production values and Uekrongtham's directing is more than adequate. Lundgren did a good enough job writing the script and he's not bad as the action lead either (even at 57-years-old). It's great to see Jaa breaking into American action films as well (between this and 'FURIOUS SEVEN'); hopefully it leads to bigger things. With the additions of Jai White, Weller, Perlman and Tagawa, what more can you really ask for?! It's not a great action film, but it is fun.
at 4:52 PM
Labels: Dolph Lundgren, Magnet Releasing, Reviews, Skin Trade, Tony Jaa