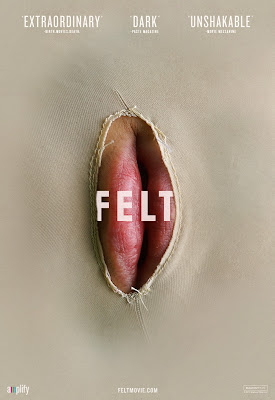 Amplify Releasing recently released the official teaser poster for the upcoming psychological thriller "Felt". The film has its its world premiere back at Fantastic Fest 2014. At that festival Amy Everson took home the "Next Wave" Spotlight Competition award for Best Actress.

For more information on this film, you can visit the film's official website at: www.feltmovie.com

Amy is hanging on by a thread. Struggling to cope with past sexual trauma and the daily aggressions of a male-dominated society, she creates grotesquely-costumed alter egos that reappropriate the male form. While giving her the sense of power she craves, acting as these characters pushes her further into a world of her own making. When she begins a new relationship with a seemingly good guy, she opens herself up to him - but that vulnerability comes at a dangerous cost, and her alter egos threaten to lash out in explosive violence. Based on the real experiences and art of co-writer/star Amy Everson, Felt doesn't just point a finger at rape culture; it takes a full on swing at it, creating a feminist psychological thriller that audiences will be hard-pressed to shake off.
at 5:51 PM
Labels: Amplify Releasing, Felt, Indie News, Teaser Poster