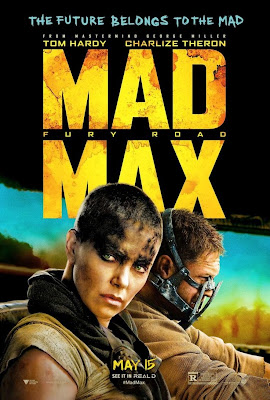 George Miller's big-budget reboot to his immensely popular post-apocalyptic 'MAD MAX' trilogy (from the 70s and 80s). This one stars Tom Hardy, in the title role, replacing Mel Gibson (who played the role in all three previous films). It also stars Charlize Theron and costars Nicholas Hoult, Hugh Keays-Byrne (who also played the villain in the original movie), Nathan Jones, Rosie Huntington- Whiteley, Zoe Kravitz, Riley Keough, Abbey Lee, Courtney Eaton and Josh Helman. Miller directed and co-produced the film, as well as co-wrote the screenplay; with Brendan McCarthy and Nick Lathouris (two first time film writers). The story revolves around Max teaming up with another rebellious survivor, named Furiosa, as they try to outrun a crazed cult leader, and his army, and make it across the desert to Furiosa's homeland, with the cult leader's five wives. It was made on a budget of $100 to $150 million, but it's full of impressive practical effects and old school stunts (and a small amount of CGI). It's the first installment in 30 years and although it takes place after the events of the original trilogy, it also reintroduces us to Max; and goes back over his origins, as well as the origins of the world he now lives in. The film has gotten nothing but rave reviews from critics, at an unprecedented level (for a genre action flick like this), and it could be a possible 'Best Picture' contender, come awards time (it should be). I absolutely love this movie!

The setting is, once again, that of a distant, chaotic future; after normal civilization has collapsed, and just about everyone has gone crazy. Max Rockatansky (Hardy) is still a loner survivalist, on the run from his past (and the ghosts of his dead family). He's kidnapped by cultists, called War Boys; an army under the leadership of a fascist dictator named Immortan Joe (Keays-Byrne). When a beloved cultist commander, of Joe's, named Furiosa (Theron), goes rogue, and steals his five enslaved wives, Joe leads his whole army after them in pursuit. Furiosa is trying to lead the women to the place where she grew up, in hopes of a better life. She reluctantly teams up with Max, in order to do so.

I think seeing this film in the theater, was one of the greatest cinematic experiences of my life (and I plan on doing it again, really soon); I recommend to all true cinephiles, that they see it the same way! The visuals are breathtaking and the action is absolutely glorious, and non-stop; it also has an awesome score (by Junkie XL). It's full of extremely bizarre, and memorably quirky, characters too; and it even has a little heart, thrown in, as well. The movie feels like a throwback to the 80s; but it's also a groundbreaking milestone, in film and art (in general), in it's own right. Miller created an amazingly artistic, and disturbingly beautiful, world; of crazy characters and totally insane, and admirably captivating, chaos (as he did with 'THE ROAD WARRIOR', and to a lesser extent 'MAD MAX' and 'MAD MAX BEYOND THUNDERDOME'). The film is like 'THE ROAD WARRIOR' times ten though, and I'd rank it among the all-time greatest action movies ever (like 'ALIENS', 'TERMINATOR 2', 'THE DARK KNIGHT'and 'THE EMPIRE STRIKES BACK'). It's more than an action film though; people call it a 'punk western (on wheels)', which I agree with, but it also celebrates uniqueness and being different (as well as not conforming to popular society). It shows how mental illness can be a good thing; how some of the biggest heroes, among us, are totally mad! Believe all the hype; it's a pure cinematic masterpiece!
at 5:47 PM
Labels: Mad Max: Fury Road, Reviews, Tom Hardy, Warner Brothers