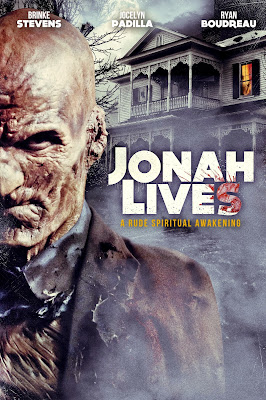 Wild Eye Releasing has had a very good track record when it comes to the films that they’ve distributed. When I first heard about “Jonah Lives”, I wasn’t sure if I wanted to see this film. What made me ultimately decide to see this was the fact it had 80’s scream queen Brink Stevens starring and the film was filmed in the southern New England area where I live.

The film is about a woman (Brink Stevens), who murders her husband and gets away with it. Everything in her life is going well until a group of teens accidentally awaken her dead husband with their Ouija board. What the teens don’t know, he has returned as a zombie and he is out for revenge and them for awaking him from his eternal sleep. Can they find a way out of his murderous victims before they become his victims?

Going into this film, I was expecting to enjoy “Johan Lives” and have a good time reviewing this film. It’s a supernatural film and the fact that it stared Brink Stevens from such films as “Sorority Babes in the Slime Bowl-O-Rama”, “Slave Girls from Beyond Infinity” and most recently “Trophy Heads” But once I pushed play, this film started to downhill in a hurry and it’s sad as this film has a very good score. It’s just that everything felt dull.

Writer/director Luis Carvalho doesn’t do a good job making sure the film has a suspenseful and horrifying feel to it. From the way that he handles his direction of the death scenes to the flow of the film everything felt dull and made for some very boring moments. You can’t have that when you’re dealing with a supernatural film. The other thing that I didn’t like was the performances. Carvalho doesn’t do a good job making sure the performances are entertaining to keep your interest. The cast tries hard to do that but the sloppy direction really makes the performances feel very one note. It would’ve have been better if he directed that aspect with more energy.

Carvalho’s screenplay wasn’t that better, as it worse than his direction. This was one that left me more confused at times as it felt like two films in one. The actual film with everyone trapped in the basement and the party upstairs. This film should’ve stayed downstairs for almost the entire time. Every time the story would cut into the party scenes, the flow of the film comes to a screeching halt with characters like the child upstairs in the house where her parents are partying. This character played no part in the overall story. It felt needless and made no sense with the story. There should have been one or two scenes plus the ending as the party subplot was highlighted way too much as it took away the focus from the characters that were in danger. The other thing that makes this very bad was that some of the scenes were way too long. When you have written scenes that goes on and takes forever to end without a payoff, you start to become bored. This slowed this story down, as it made it for some very boring scenes. When that happens, you lose interest like I did with this film.

I was really hoping to enjoy this film considering this film was made in Fall River, MA, but I can’t recommend this. “Johan Lives” is a supernatural zombie film with bad directing and a horrible screenplay. I wished this title would stay in its grave.