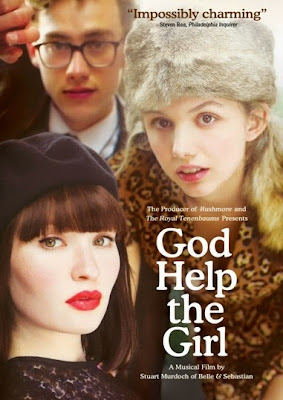 Forget the girl, God help you if you sit through this movie. Cheap shot, I know, but all I could think about after this incredibly dull flick was over was finding a way to ask God if I could have the last two hours of my life back. God Help the Girl, written and directed by Stuart Murdoch, is a musical very much in the same vein as Once and Begin Again, but is nowhere near as good.

The movie centers around Eve (Emily Browning), a young bulimic woman with a propensity for sneaking out of the treatment center she's checked herself into. On one of these nightly jaunts she meets James (Olly Alexander, real-life musician in the band Years and Years), a guitarist whose band falls apart in front of Eve's eyes. Through a completely random string of events that happens way too quickly, Eve finds herself running away from the treatment center to platonically (on her part, anyway) live with James and his completely inconsequential roommate. James then introduces her to one of his music students, Cassie (Hannah Murray) and the three of them quickly bond and decide to form a band called, you guessed it, God Help the Girl. What follows is a complete mess of a tale of how Eve unravels and how the band, such a driving force in the first two acts of a movie peppered with random song breaks, becomes completely inconsequential in the final act.

The three members of the principal cast are all very good in terms of their acting performances. For a musician, Alexander is a decent actor and when his character talks about music and bands (some of the best dialogue in the entire movie), you can feel his passion for his art. Browning is a beautiful woman with a magnetic personality and a surprisingly strong singing voice... which is good since she does a good ninety percent of the singing. Murray is a capable singer as well for the few numbers she chimes in on, but the problem is the songs themselves. With one or two exceptions, the songs all sound more or less the same and the lyrics are literally just saying what the characters are doing. They're catchy enough, but it would have been nice if they went a little deeper.

God Help the Girl has a few bright spots, bit not enough to make the movie shine. I give it just one star out of five.
at 7:33 PM
Labels: Anchor Bay Entertainment, God Help the Girl, Reviews