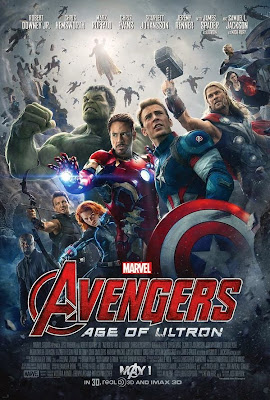 'AVENGERS: AGE OF ULTRON': Four and a Half Stars (Out of Five)

Sequel to the 2012 blockbuster superhero flick 'THE AVENGERS'; and the 11th film in the Marvel Cinematic Universe. Joss Whedon returned to write and direct this installment (as he did the first) and most of the cast reprises their roles; including Robert Downey Jr., Chris Evans, Chris Hemsworth, Mark Ruffalo, Scarlett Johansson, Jeremy Renner, Samuel L. Jackson, Paul Bettany and Cobie Smulders. Don Cheadle, Anthony Mackie, Idris Elba, Hayley Atwell and others also reprise their parts from other Marvel films; while James Spader, Aaron Taylor-Johnson, Elizabeth Olsen and Linda Cardellini join the cast. This time around the mighty superhero team must battle an artificial intelligence unit, created by Tony Stark and Bruce Banner, that's bent on revenge; against all of humanity. I found the film to be entertaining, and it's sure to satisfy most comic book fans, but it's definitely a mixed bag.

The story revolves around an A.I. named Ultron (Spader), who comes to life as part of Tony Stark's (Downey Jr.) defense program. Ultron is bent on destroying humanity, instead of protecting it, and enlists the help of two genetically altered twins (Taylor-Johnson and Olsen). He also builds an army of deadly robots, to serve as his army. It's up to the Avengers to stop Ultron and once again save the world.

The movie is all over the place; there's a shitload of characters and most of them are pretty underdeveloped. We do get to learn more about Hawkeye (Renner) and Black Widow (Johansson), the two Avengers who haven't had their own movies yet, but the rest of the principal players don't have engaging story lines. Thor (Hemsworth) serves as great comic relief; but Stark's one-liners are getting very tired and poorly written. There's also some pretty badly done melodrama (throughout the movie) and an oddly placed romance between Hulk (Ruffalo) and Black Widow (What happened to Betty Ross?!). It's also never explained why Tony Stark came out of retirement and has several suits of armor again (after destroying them all in 'IRON MAN 3'). The action scenes go on for way too long (and are pretty reminiscent of 'MAN OF STEEL', or a Michael Bay 'TRANSFORMERS' film). It does have plenty of good moments too, though, and most die-hard fans will still love it; for all the geeky comic shit it does stay true to. It's just not the most well developed, or balanced, movie (as a result). The first film and some other installments, in the Marvel Universe, are better; but this film is definitely still an entertaining and mostly satisfying addition!
at 1:01 PM
Labels: Avengers: Age of Ultron, Chris Evans, Chris Hemsworth, Jeremy Renner, Mark Ruffalo, Marvel Studios, Reviews, Robert Downey JR., Scarlett Johansson