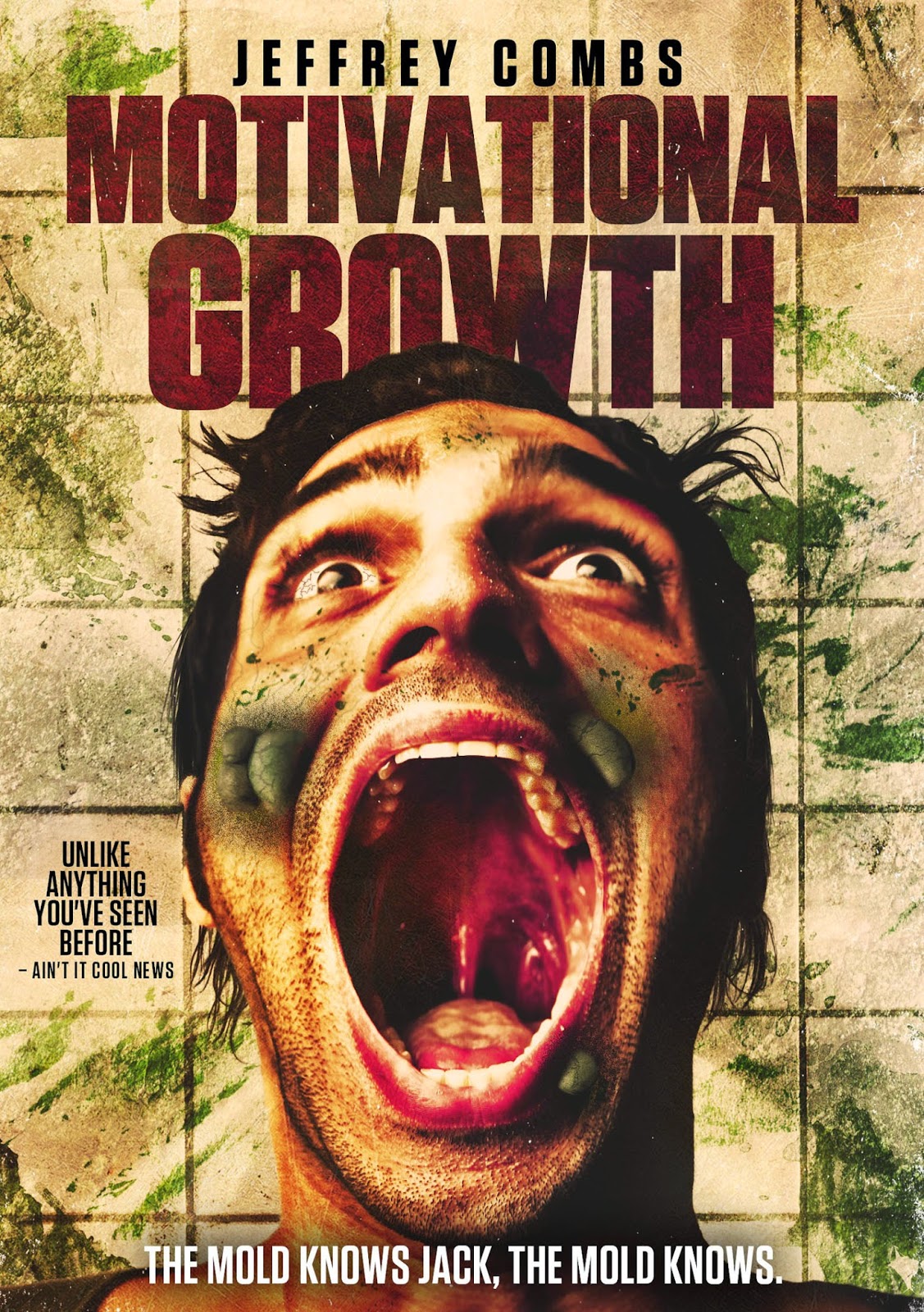 When I first heard about “Motivation Growth”, it drew my interested almost immediately. It was because of the fact that it stars Jeffery Combs from “Re-Animator” and most recently “Would You Rather?” which he was great in. Still, I was a little skeptical about this film considering the film looked like it was going to be one of those weird films that I would love or hate.

The film is about a depressed and reclusive man (Adrian DiGiovanni) who spends his time taking advice from a talking mold (Jeffery Combs) in his bathroom. The mold tries to help him with his problems and change his livelihood. He meets a woman and finds that he’s happy again and enjoying life. Everything starts to turn around for him until he starts hearing messages from his television that the mold might have a hidden agenda. He becomes caught up in the middle of a battle between good and evil that he isn’t fully aware of and can’t find a way out of this mess.

I've seen and reviewed some weird horror films even since becoming so passionate with this genre. “Motivational Growth” is up there with films like “Street Trash” and “Slime City” as one of the weirdest films that I’ve seen. With that said, I still enjoyed this film.

The main reason for this film being very good was its directing. Writer/director Don Thacker does a very good job making sure that the flow of the film was very good. From the mold effects to how the gore elements were used, everything had a surreal tone to it. It also gives this film its odd and weird feel which is complemented with a score that fits the film perfectly and direction that makes the scenes on screen work. Thacher also does a very good job making sure that the performances fits it’s out of control tone. Whether it’s the way that he has cast deliver their lines to how they make their characters stand out, everything helped keep my interest even though I wasn’t sure what to make out of everything.

The screenplay written by Thacker was very weird and bizarre. With that said, I still liked it. One of the things that I liked about his screenplay was the fact that it was very different from any conventional film that you will see. You have a talking mold, a main character breaking the fourth wall with self-narration and weird supporting characters. This is the type of film where I would rip the screenplay to shreds. But in a weird way, it made me interested in the main characters. When that happens, I can forgive all of the absurdity that takes place like I did here with this film. The other thing that I liked was the fact the screenplay focuses on the main character and the talking mold. The whole film takes place in an apartment. Usually you start to get bored with it being in one setting, but what makes it work was Thacker’s ability to make sure that the dialogue is interesting enough to keep me interested in where the story was going.

The only problem that I have with this film was the fact that it was a little too long. I wished that this film was around ninety minutes, but it’s only a minor grip as I enjoyed this film. This is a film that is not for everyone. But if you’re a fan of films like “Street Trash and “Slime City”, then “Motivational Growth” is right up your ally as its oozing with weirdness and originality.