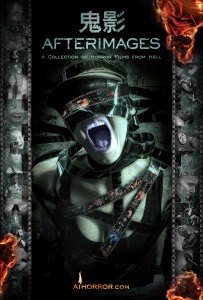 Horror Anthologies used to feel special. With films like “Tales from the Darkside: The Movie” and “Trick r Treat”, it had a special feel to it. These days, the horror subgenre doesn’t have that special feel it once did. In last year, I’ve watched seven of these including “The ABC’s of Death 2” and V/H/S Viral” most recently. This leads me to my review of another horror anthology film “Afterimages”. Yes, it’s another horror anthology, but the only difference is that this film is written and directed by one director (Tony Kern).

The film is a collection of five films (Ghost Pool Leg, Xiao Bao Bao, Skin Deep, Rekindling and Burnt Offerings) that centers on a group of student. They find out when they burn a camera for the dead, a mysterious film comes from the ashes containing something horrifying. But what they don’t know is the more they continue to do it, the more dangerous it become for them as you don’t mess with the dead.

It’s amazing that I don’t get tired of these horror anthologies even though I was starting to get fatigued of watching these films. I still wanted to see this one after seeing the film’s trailer and seeing the nice poster art for this film. I was surprised that I wasn’t that tired of watching this horror subgenre after seeing “Afterimages”, as this is one terrorizing film.

Most of that has to do with the film’s writer/director Tony Kern. His direction was very good. One of the things that I liked about it, he does a very good job making sure each of the shorts had a different feel and tone to it. Whether it’s the way that he approached it in his screenplay to how he makes each of the short look on screen, everything had a dark and frightening tone to it. This is what made this film very good from the first story to the end of the wrap around segment. The other thing that he does well is directing his cast. Kern does a very good job making sure the acting is good enough to make some of the film’s scary scenes feel frightening. This really helped me enjoy this film, as I was interested in what was happening and it provided scares.

All of the five stories in the film was good as I have nothing bad to say about these. There were two that stands out from the rest. The first one that stands out was “Skin Deep” What made this short good was the fact that the cast in the short had chemistry and the story worked. It helped build the tension that was needed to make this work. Considering the whole short takes place in an elevator, it’s something that has to happen for it to be good and intense. Thankfully, it was as this was a very good short that made me wished this was a standalone film. The other one that I liked a lot was the film after that “Rekindling”. Tony Kern does a very good job with the way that he directs this short. From the movement of the ghost to how the main character is developed, it provided some very good scares and it kept my interest through. It was the most terrifying short out of the bunch.