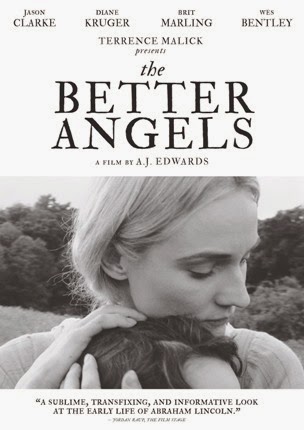 Plot: The year is 1817, the state Indiana. Location a log cabin. The atmosphere the growing frontier.

Our main character the one and only childhood of Abraham Lincoln.

What a truly wonderful, historical drama on one of the greatest men to ever live, Abraham Lincoln. This is a surprisingly awesome and utterly brilliant, black and white, biography on the young life of Lincoln growing up in the wilderness of Indiana. You get to experience this harsh way of life through a realistic setting that transcends off screen, as believable and reality based. Directed and written by A.J. Edwards, which I am shocked and amazed, that this is his first feature length film as director. He did a stunning and amazing job. He made you believe the story and crafted it in a way, that comes to life off screen and makes you feel, as if you’re a part of what is happening.

This has some amazing actors and actresses. The beautiful and stunning Diane Kruger who plays Sarah Lincoln. Diane is amazing and is one of those actresses that can truly own her part and give you a stunning realization of the character she is playing. I first got wind of her watching the wonderful, and sadly canceled television show, The Bridge. She aces the part of Sarah Lincoln. Also starring another amazing actor, Jason Clarke; he plays Tom Lincoln. Like always in his acting career, he is able to become the part and makes you feel as if you are there with the character. Simply put he makes the part come to life. The other stunningly beautiful lady of the film Brit Marling, is excellent as the role of Nancy Lincoln. She graces the part with genuine believability of her character. She seems effortless in the part.

Now I must speak highly on a gifted actor. This being his first role. His first acting experience. I was blown away by this extraordinary young man, playing Abe Lincoln. Braydon Denney is golden in this part and I cannot wait to see him act in more parts. I hope he has a long career in this field, because what I saw through this role, is something Hollywood sadly is lacking a lot of this day and age, and that is the very definition of actor. Braydon Denney aces this part and defines what great acting is about through emotion, moods, gestures and a complete owning of his character.

The whole cast is wonderful. The film feels, original and unique and places you there in the time period and makes you want to learn more about Lincoln. On a side note, my father named me after Abraham Lincoln and so his legacy and his truth has always been a part of my life. He was a man that needs to be remembered, and studied, and looked upon for every generation.

I think what ultimately needs to be said is how one the greatest directors in cinema history saw something in this picture, and presents it to the world. Terrence Malick who is one of the producer’s allowed this beautiful piece of Americana. An almost poem like history listen. It’s an art-house film of excellence in story, acting and direction. I think it’s a film that needs to be seen and experienced in all its vivid artistic atmosphere. I think the best way to describe this film is like a beautiful black and white picture come to life. A.J. Edwards, has been a protégé of Master Terrence Malick and that mastery has rubbed off onto A.J. Edwards. Edwards not only brings the beauty of silence, and lightening, but also uses his own unique stamp upon the film-making world.

To sum the movie up, it’s emotionally draining and very intense in an artistic setting. I think what really makes this film stand out, is the lighting, the moods, the darkness, the brilliantly massive and stunning camera work. It’s an interesting experience that the viewer steps into, an almost dream like state of history.

Researching some of the back story of the growth of the film is amazing. Six years A.J. Edwards has but into this. Researching and studying alongside historians just adds to the truthful brilliance of the film. To me some of the hardest acting in the world, is when dialogue, is but a small factor in a film.The moods, emotional makeup, and structure of a character has to be acted out for the viewer to understand, believe and grasp. You have to control the viewer. The actors along with A.J. Edwards’s unique approach, through his artistic, poem style of filming, comes off as something new. Something the film world needs, is new. A.J. Edwards is that new.

You can buy this on DVD, put out by Anchor Bay Entertainment. There is an 8 page insert booklet. The DVD comes with option of English subtitles for the hearing impaired plus an option of Spanish Subtitles. The audio is Dolby Digital 5.1. Aspect ratio Widescreen 2.40:1 Runtime is 95 minutes. Rated PG Black and White.
at 4:12 PM
Labels: Amplify, Anchor Bay Entertainment, Brit Marling, DVD Review, Jason Clarke, Reviews, The Better Angels