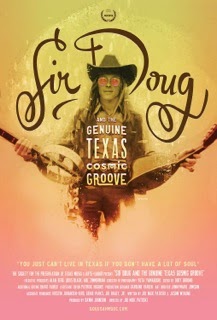 Arts+Labor recently send us information about their upcoming documentary "Sir Doug & The Genuine Texas Cosmic Groove". The film tells the focuses on Doug Sahn, a hero and popular musician in Texas.

"Sir Doug & The Genuine Texas Cosmic Groove" will have its world premiere at this year's SXSW on Thursday, March 19th at the Paramount Theatre in Austin, TX at 7:30PM. The film will also addition screening on March 20 at the Alamo Drafthouse Lamar C at 2:30 PM and March 21st at the Viemo Theater at 11 AM.

For more information on this film, you can visit the film's official website at: http://www.dougsahmdoc.com/

Sir Doug & The Genuine Texas Cosmic Groove tells the story of Doug Sahm, the wild man musicians' musician and unsung hero of Texas music. A country music child prodigy and teenage rhythm & blues dynamo who caused a riot at his San Antonio high school, Sahm emerged as an international rock star leading the Sir Douglas Quintet. He landed in San Francisco just in time for the Summer of Love in 1967. He returned to Texas as the cowboy hippie rocker who built a burgeoning music scene in Austin in before forming the Tex-Mex super group The Texas Tornados. A kinetic, quirky character with a solid sense of place as well as an innate wanderlust, Doug Sahm's story is the story of Texas music.